Keep Right on to the End of the Road

Ev’ry road thro’ life is a long, long road,
Fill’d with joys and sorrows too,
As you journey on how your heart will yearn
For the things most dear to you.

With wealth and love ’tis so,
But onward we must go.
With a big stout heart to a long steep hill,
We may get there with a smile,
With a good kind thought and an end in view,
We may cut short many a mile.
So let courage ev’ry day
Be your guiding star alway.

This is St Andrew’s night (November 30). I had forgotten about the anniversary until I heard one or two Scottish songs being sung on the radio. One was of Sir Harry Lauder (1870 – 1950), singing rather inspiringly, Keep Right on to the End of the Road – a song, I understand, written sometime after his only son was killed in action in 1916 during World War 1. Well, I suppose most folk would not have paid too much attention to this recording, and I imagine that very few of the younger generation will even have heard of Harry Lauder. 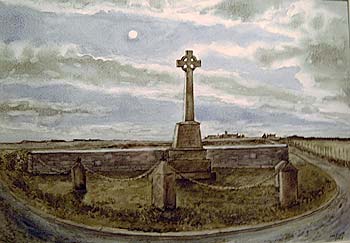 Still, the words of the song, though sounding a little sentimental to modern ears, are not entirely inappropriate today. I shall finish my letter with the chorus which is sung after each verse. Before we know where we are, Christmas will be upon us, so I thought I should bring our latest activities up to date – hence this in-between letter.

I hear that a ‘sketch’ (the title of which remains, so far, “hush, hush”) is being practised for the association’s end-of-the-year dance. That should be fun. By the way, yes, Jeremy Godwin (in a letter to The Orcadian), is correct with his date for the wreck of the Svecia (mentioned in my Harvest Home letter) – it was 1740, not as I mistakenly said, 1741.

At the time of Remembrance each year in November, I frequently find myself looking through poetry or writings about the First World War.

One of the books that I have been dipping into again is Lyn Macdonald’s To the Last Man – I think I have mentioned the book previously. It deals with the last great German offensive in 1918, and often makes disturbing reading, made all the more powerful by the inclusion of accounts and recollections of some of the participants themselves.

One account, for instance, described how a German soldier, overrunning a British position, finds and plans to retrieve a pair of good leather boots. On closer inspection he finds the severed feet of the former owner still in the boots.

A week after Remembrance Sunday a good turnout of folk gathered at the North Ronaldsay War Memorial. John Tulloch, Senness, laid the wreath. Sinclair Scott played The Flowers of the Forest. The two minutes silence followed, after which John Cutt, Gerbo, recited the familiar verse of Binyon’s poem, For the Fallen.

Patricia Thomson read a prayer and John Cutt completed the ceremony by reciting the words of In Memoriam, a poem written by his late uncle, William Swanney, Viggie.

Another event, organised as part of Aberdeen University’s key learning opportunities, took place on November 25 in the new centre, when Norman Newton gave an illustrated talk entitled Muckle Flugga to the Mull of Kintyre. I missed this event which, by all accounts, was most interesting. A good turnout later enjoyed tea, homebakes etc.

And still in the new centre, a few days later, the association ran their yearly whist drive in order to raise funds for the children’s Christmas Eve party. Very generous donations amounted to £150. Other than those events there have been various meetings: association, housing, creating a web site for North Ronaldsay, and shortly there will be the AGM of the North Ronaldsay Trust.

Around the Harvest Home time and later, there have been spectacular sightings of the Northern Lights – or the Merry Dancers as we call them. Such sights in the night sky always convey a feeling of mystery and wonder despite the scientific explanations.

It’s sometimes the magnitude of the display as it sweeps across the sky that can be so impressive, and the landscape is lit up in a way quite different from the effect of moonlight. One has to be outside for a time as everything changes from minute to minute, and the most wonderful and sometimes stunning effects can easily remain unseen.

One of these recent sightings was not to be missed: I was lucky enough to be out watching on this occasion. In the west, the shimmering lights were of a beautiful red hue and from that direction they seemed to sometimes fly across the heavens in brilliant colours of white and green; the southern sky was quite taken over by the ghostly dancers – for ghostly they seem.

When the Merry Dancers are predominately in the southern sky, it is said to be sign of impending bad weather. As I was watching this great spectacle of changing colour and form, stretching as it did from west to east, there seemed to be a sudden intensifying of white light in the very centre of the sky. It radiated in waves of brightness that rippled across the stars with such speed that it quite mesmerised the senses.

Last night was such a night of relentless, heavy rain that it made a ‘buthy’ glad to be under a roof and lying comfortable and warm in bed. (Imagine being in the First World War trenches at this time of year and in such conditions.)

Yet, today has been relatively mild with sunshine bravely cheering up the landscape. And the sunset, as November draws to a close, was worth seeing – brilliantly yellow and gold with purple and violet cloud stretching across the evening sky.

As the ‘mirking’ or twilight crept over the island a growing crescent moon began to brighten ever so slowly, and the sea, which has been very nearly ‘aff o’ the ‘boddam’ at times this last few days, is settling down nicely.

I’ve just been out to view the night before finishing this letter. The sky is absolutely clear and the glittering stars make a fine sight.

In the northeast the Plough is standing on its stilts and a little to the west of south, the constellation of Orion twinkles far away.