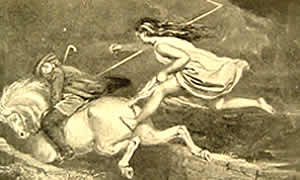 Tam o’Shanter's mare Meg having her tail caught by a witch. Howie Firth gave a perfect rendition of the poem during the North Ronaldsay Burns Night celebration.

This is a letter I began to write on ‘Aald Neuar-e’en’.

I thought at the time that it would not be amiss to cast one’s mind back to Yule, before January finally flies away, and remember a time of year that, in the old days, was greatly looked forward to — the days when the real home-brewed-ale was the mainstay of those old fashioned times.

So here I am writing this introductory paragraph between the end-of-the-year celebrations and my account of the island’s Burns’ Supper.

January 13 should be the last night of the New Year visits and time to bring the ‘Yulin’ (making ones visiting rounds and generally being on holiday) to an end.

I managed all my familiar visits apart from one house. Unfortunately, when I went there (less than half an hour ago), I discovered that the ‘fock wur no in aboot’.

So back home I came ‘wae me whusky bottle’ and me good luck New Year gifts. I thought, never mind, have a go instead at the beginnings of a new ‘letter’ as a build-up to my coverage of the forthcoming Burns’ Supper.

In my last letter – my Yule letter as I like to call it – I was day dreaming about the ghosts of the Linklestoon men coming back to Antabreck to relive one of their great Hogmanay nights.

I had in fact written the letter the day before Hogmanay and imagined this pleasant visitation of the spirits of the past.

The day had been the most beautiful winter’s day that you could imagine. There was a scattering of snow lightly covering the island. The sea was a dark ultramarine and, in the east, the Fair Isle was decorated, here and there, with snow, but clear cut like a diamond against the darkening sea.

I had, some would say, wasted most of this beautiful, windless day composing my last letter to The Orcadian.

Having got the main of the writing to my satisfaction, I went off on foot to see the last of the setting sun and to watch the transition from its afterglow to the light of the rising moon.

On my way, with the frosty road crinkling and crackling under my feet, I met a couple of young folk – here for the end of the year celebrations – and we had a grand ‘crack’ for a bit. I continued my walk, firstly to the graveyard, then into the dark interior of the adjacent Old Kirk.

It belongs to an American who bought it from another. The first, planned, we heard, to make it into a jewellery factory, the second, into a dwelling house. Can you believe it? Both had to give up their ambitious plans – this was when they discovered, too late, that the building was listed.

Well, buyer number two is waiting for a re-cap of his money before relinquishing the building. Sadly, meantime, the building is deteriorating day by day.

What is to become of all the empty churches throughout the land? And what has become of the sort of folk that used to attend them?

From the Old Kirk I meandered further south, travelling now by the light of the rising moon.

I was intent on reconnoitring the old Standing Stone so as to judge whither a few enthusiasts might manage the relatively recently revived, yearly visit and informal dance round the stone on New Year’s day – just for the fun of it all you understand.

Last year, as a result of an earlier occurrence, ‘some flegged baest pat an end tae wur silly chaipers’ (often animals are in the area but normally eye the proceedings with studied curiosity).

Anyhow, not to be beat, we revived another old custom and danced in the courtyard of the New Lighthouse instead.

My decision was that I thought the New Year’s day visitation very possible. While at the ‘Stan Stane’ and looking through the two-inch or so diameter, eye level, hole in the stone, I could see Venus to the south-west, and in a more southerly direction, I could also frame the moon nicely.

This, I thought, an unusual view of the two heavenly bodies. I continued my walk on to the nearby Gretchen Loch. Up flew a flock of Greylag geese with a great honking, but invisible in the evening sky. Venus threw a pale sheen across the icy loch waters.

Ah, but came Hogmanay. A ferocious day ensued, getting worse by the hour until, by six or seven at night a terrific gale of wind whistled and buffeted the island.

Then heavy rain lashed down and blew up into unlikely bits of many a house, byre and shed. No moonlight – as I had imagined the ghostly Hogmanay company might have enjoyed.

It was a struggle to walk to my next-door neighbour’s house to take in the New Year. But, eventually, by three or so in the morning, a goodly little company had built up from other travels to enjoy fine hospitality and some early New Year fun.

Sad to say, on New Year’s Day not a soul was at the Standing Stone. The fault, it seems, lies at Antabreck’s door – phones rang, folk spied, made ready, wondered. Never a sign, never an answer!

It was a bit like the old Broadway song Mr Scott regrets he is unable to dine today.

No, I was not under-the-weather – a minor migraine had laid me a ‘peedie bitty low’, and with my magic migraine tablet I dosed away the possibility of a visit to the ‘aald Stan Stane’.

Had we ventured to the monument at the usual time we would have been, ‘maistly a lock o’ puir aald drookled cats’.

Yes the rain began to ‘tuim’ again and so slipped away New Year’s Day but, nevertheless, folk here and there enjoyed, in one way or another, the first day of 2004.

This is the 25th of January. Last night, and well into the morning we celebrated the birth of Robert Burns in style. So here I am, on his actual birthday sitting down to give an account of our little Burns’ Supper.

Peter Donnelly, president of the Association, welcomed a company of well over 50 folk.

He thanked everyone who had made the evening possible and introduced the association’s guests. They were: Robert and Gladys Leslie, Mike and Hazel Parkins, Tommy and Bertha Mainland, Howie Firth – all participants in the Burns programme.

Also invited was Colin Tulloch (who had been most helpful in connection with the North Ronaldsay Trust) his partner, Leona Benston and their son, Findlay.

To the skirl of the pipes, played by Mike Parkins, resplendent in his Kirkwall City Pipe Band uniform, the haggis was brought in by the cook, Winnie Scott, and deposited at the head table.

The piper’s dram was quaffed in one go followed by another tune on the pipes, and then Howie, already in good form, swept into The Address to the Haggis.

Jimmie Thomson recited the Selkirk Grace before the supper of haggis and clapshot, along with cider, was served and enjoyed.

Drams were served for the main toast of the evening and the two speakers jointly proposing the Immortal Memory were introduced.

This year the speakers were: Bobby Leslie and his wife Gladys. Bobby has worked at the Orkney Library for 43 years and has held the post of Chief Librarian for 12 years.

Bobby, in his tribute to Burns, concentrated on the poet’s agricultural background, speculating on how this aspect of his life had affected his work as a poet.

He argued that the often hard, and physically demanding farming activity had contributed significantly to his development as a poet of depth and understanding.

He understood the nature of the land and the people who lived in that environment. Interestingly, as he completed his address, he wondered, for example, if Burns had lived in North Ronaldsay, in what way that life might have influenced his work.

Gladys, by contrast, speculated on the poet’s love of women and the manner in which this had affected his poetry, and of his involvement with Jean Armour and Highland Mary (Mary Campbell) – two of a number of women mentioned.

How this part of his life had resulted in sadness as well as joy and how those differing relationships had been the inspiration for some of his most beautiful poems.

Gladys, I thought, paid a very moving tribute to Burns. Both Bobby and Gladys quoted from Burns and both acknowledged the universal greatness of the poet and the man. Glasses of whisky and sherry sparkled briefly in candle and lamplight as Gladys proposed the toast to the Immortal Memory.

Then Sidney Ogilvie sang Ae Fond Kiss followed by a fine recitation of To a Louse.

Howie Firth followed this performance by proposing the Toast to the Lasses. He did so by telling a few appropriate stories which caused great amusement. Bertha Mainland replied – not without some humour – mentioning the many achievements, inventions and often, she thought, superior abilities of the fairer sex.

Next in the programme was a selection of fiddle music beautifully executed by Tommy Mainland. He played a number of Burns songs, but also two moving laments written by Neil Gow (who had known and worked with Burns) and ending with one of this famous Scottish composer’s more lively compositions.

The fiddle music was followed by a recitation and a reading. Hazel Parkins recited one of her poems from a book of verse published in October 2003 called, In Remembrance of Burns, whilst John Cutt read a short piece written in Orcadian dialect by Allan Taylor (published in The Orcadian) extolling the old fashioned Orcadian supper (a substantial meal taken late at night). John read the piece with vigour in the North Ronaldsay dialect.

Howie Firth then rose to deliver Tam o’ Shanter. Howie has perfected his rendition of this wonderful, imaginative poem by Burns; it is always a special pleasure to listen to, and watch Howie’s antics as he almost lives and acts the various characters and scenes that this poem describes so magnificently. With another ‘peedie’ dram ready to complete the little Burns programme, Howie proposed a closing toast – this time briefly, but eloquently, to the island of North Ronaldsay.

Dancing soon got underway with our two guest musicians, Tommy and Mike contributing significantly to the dance music.

A raffle brought in a very fine collection for the association’s funds. Tea, Westray current bun and shortbread was enjoyed before the dance once more got underway.

So swiftly did the evening pass, and with such enjoyment, that our planned communal singing of Burns songs never materialised – it can be said though, that those of us who had decorated the little room the evening before, bravely sang the five or six songs chosen, to accordion accompaniment.

But, as in Tam o’ Shanter: “The minutes wing’d their way wi pleasure”, and as the moving hands of the morning clock sped onwards and approached three, it was time for Auld Lang Syne, that most universal of songs, collected and completed by Burns and about which he said: “Light be the turf on the breast of the heaven inspired poet who composed this glorious fragment.”