I wonder if any person who read my last letter (June 2) got round to having a look at Walter Traill Dennison’s classic tale The Heuld Horn Rumpis, of which I made mention?

Well, I’ve decided to begin another letter on the heuld – or near that time (midnight) – simply for the fun of it and, furthermore, I am planning a heuld horn drink (a warm spirituous drink served at midnight) or as close to the mixture as will do.

Dennison mentions a recipe of gin and hot ale, highly spiced, which features so amusingly in the tale. I hasten to add that I’m not in the habit of drinking gin or dabbling in strange concoctions, but consider the experiment interesting.

I’m thinking too that I might continue with the letter and even finish it this very night.

I have done but little today, which partly explains my frame of mind; so I have ordered gin, and I aim to heat up some ale – sadly, not the real old North Ronaldsay ale, but something from a tin. (Actually, mulled ale, even commercially brewed, with a dash of sugar can be most pleasant.)

An occasional swig or more of the heuld horn, now and again as I’m writing, could be quite inspiring!

And the local pronunciation of heuld – if I can make an attempt to explain the sound of the word – the ‘eu’ sound, as someone has said, is almost identical with the French, ‘eu’ as in ‘peur’.

I can think only of the vowel sound of ‘u’ in the words ‘ugly’ or ‘smug,’ that otherwise comes anywhere near the ‘eu’ in ‘heuld’.

Hugh Marwick gives quite a lengthy explanation of the word in The Orkney Norn. I am thinking now, though, that a few servings, such as of the size mentioned above, would put an end to any serious writing or much of anything else.

The little jenny wren, whose nest I mentioned in my previous letter, has now hatched out her family. While she was sitting, when I walked through the door nearby, she would tolerate a quick passage; but if I seemed to hesitate – even for a moment – out of the nest she would fly.

Sometimes I would try to see if she was in her cosy home. That involved a fraction of time longer when her little head would pop out with beady eyes watching me.

So her decisions about safety – whether to sit or leave the nest – she made in split seconds. Now, when I pass by two or three peedie opened beaks, yellow lined, appear and then as quickly disappear when they realise that I am certainly no jenny wren.

As to the family of ‘tee-wups’ that were running to safety when I was rolling – not personally you’ll understand – but flattening the ground with a tractor-pulled roller (some folk thought I was actually rolling about on the ground which would have been most amusing) they are not as yet flying but they’ve grown, and now run even faster with longer legs.

And then the peat (I said that not a peat has been turned at Antabreck this year: I meant, in the North Ronaldsay sense, the ploughing of the land). There are no peats in the island. To be a bit more accurate, and using the local dialect, a series of paets (spadefuls) would make a furrow, then a field. How else, ‘for heevens sake,’ could I have sown an acre or two of oats?

The ‘ae’ in paet, by the way, is pronounced as in the old Scots song Ae fond kiss.

Anyway, I do so like the cry of the lapwing or the ‘tee-wup’ in the spring and summer. In the autumn and winter those birds become more solitary, and often in the dark of a night they will, as one passes by, suddenly fly away with one sad cry.

No sign of my bottle of gin – my messenger is dilly-dallying. I’m afraid I’ll just have to bide my time.

Now then, the other day, when the wind was once more in the north, the air was as invigorating as the after-effects of sea spray upon one’s face; or the feeling one has after freshening up with a wash just before going out into the open air.

So spectacular and full of sunshine was the day, with summer-looking clouds rolling endlessly from the north, brilliantly white with purple and pink where the sun made shadows, that one could hardly but feel greatly exhilarated and absolutely alive.

Below this impressive sky, the sea was a blue of deepest intensity, sparkling with the white of broken water.

Such days bring back memories – a curious feeling of something that happened long ago.

Certainly, such a day, with the sea horses flying, would remind the old creel-men of thudding along in their famous praams with the salt spray sweeping the boat and her crew.

The sun would create rainbows which would stay with the boat on the starboard or portside according to the course being run. Ah, for such a day indeed.

It’s past the heuld. Can’t have this. I’m away for my heuld horn drink ingredients. As I set forth, Venus was bright in the south west, and further west, the new moon, crescent-shaped and rather beautiful, hung not too far above the western sea,

We’ve (who? where? – it’s already all round the island!) experimented with a heuld horn mixture, including some spices.

Quite interesting, and not to be trifled with I think – I tried a couple of glasses (no drinking horns at hand though I know there is one somewhere at Antabreck).

Now I’m back home and inside, as I write, but before coming in I looked round about the island.

As well as our lighthouse, another flashed to the west – Noup Head on Westray – and the Start lighthouse on Sanday threw forth her beams.

In the north, dark purple clouds sailed overhead, disappearing away south. Nearer the horizon, more elegant, darker clouds formed zig-zag patterns like carefully-drawn shapes seemingly unmoving, beyond the force of the wind. And then at another level – higher, near the crown of the sky – pale, ghostly clouds moved in unison with their darker companions.

It’s now well past the heuld. This is ‘waant o’ wut’ – without much sense.

As soon as my letter appears I shall hear some very critical comments about my activities – or lack of more important ones.

Never mind, let me see what is happening outside at this hour – coming on three in the morning.

The early dawn is in the sky, rose-coloured above changing cloud formations, which stretch like distant mountain peaks across the northern sky.

The wind is still in the same direction but the sky above is now clear and brighter than before.

I can hear in the distance the call of oyster catchers and of the ‘whap’ or curlew. Occasionally, a native ewe (brought in from the shore to feed on the grass for the lambing time) calls to her off-spring, and the sea is still dark and foreboding. 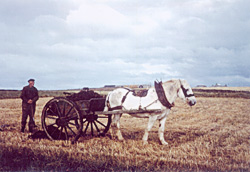 The first house I see in the brightening of the dawn, is Verracott (recently renovated and occupied from time to time).

There lived Willie whom I remember, a tall, arresting-looking man who still made use of his horse into the early 60s.

In his youth he worked for a time, as many young men from the island did, on Mainland farms and others in the North Isles.

I remember him once singing a snatch from the bothy ballad The Dying Ploughboy.

Further north, in fact the most northerly croft, Nether Linnay, is silhouetted against the cloudy background but it stands sadly, and rather lonely, with memories of past generations, as does Burray and others that I see which fit snugly into the island landscape.

Before coming in to finish this letter, I stood for a time with the north wind blowing in my face. There was the heavy hushing of the sea carried by the wind, with a line of white surf visible along the shoreline. The call of a bird here and there would sound across the land. This feeling, this turning of thought and memory to scenes from the past, would come again.

I knew that it was unlikely that any soul, save myself, would be out at this bewitching hour of the morning, which somehow made my contact in memory closer with those folks now gone.

It’s strange, but you know very often in one’s dreams, as an old Chinese poet said: “It’s there where once again we can meet up with those we once knew.”

But like most dreams, the seemingly very real happenings which at the moment of wakening seem so crystal-clear, just fade away like the rose colours of the early dawn.