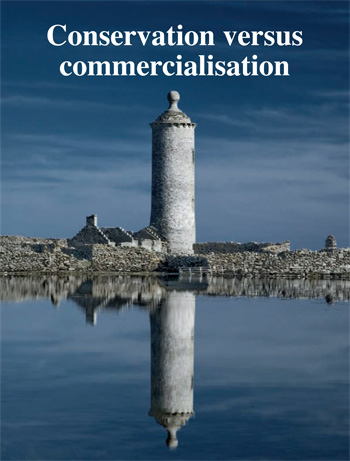 In 2006 (December 14), I wrote A Letter from North Ronaldsay entitled: Do we really need to restore the Old Beacon, or is conservation the best way to proceed?

My letter offered an alternative point of view – conservation. It was written and published after the public voting – firstly in Scotland and then nationally – for the BBC Restoration Village programme.

The BBC programme presented a plan for the Old Beacon (OB) that meant: almost full restoration of the monument; access to the top for the public; re-roofing the dwelling accom­modation; interpretation display; water and electricity; toilets; replica lantern, etc.

In Scotland, the Old Beacon project came first, and nationally it came third. Money awarded from the winning Scottish entry, plus other money received, was used to fund an overall survey of the OB.

Since the OB proposal did not win in the final vote, there are no further requirements, as far as I am aware, by funding agencies to undertake the restoration project, thus leaving the future plans for the monument open for debate.

The money received was used for the overall survey: projected costings; erection of a scaf­fold by a firm from the South; purchase of the scaffold; inspection of the tower by a struc­tural engineer; removal of over 200 years of accumulated guano and prevention of further bird invasion.

The reassuring result of the initial survey was that the tower and dome were pronounced “structurally sound” – no fear of the ball falling down. However, the engineer stated that, if there were to be a restored balcony for tourist access, then the badly-worn (in parts) walkway slabs would have to be replaced. Additionally, the engineer recommended pointing the corbelled roof structure, which carries the crowning ball.

Since that time (June 2008), the unsightly, all encompassing scaffold, unused and visibly deteriorating, continues to face the elements in one of the most exposed and sea-spray inva­sive areas in North Ronaldsay.

The very major work required (virtually rebuilding the top) for a new balcony is a major concern for Historic Scotland. Access to the top, either for the public or inspection purposes only, would entail strin­gent Health and Safety regulations with pro­tective railing, etc.

How would such safety facilities compro­mise the 200 year-old historical and aesthetic profile of the top of the Beacon?

This too is a concern for Historic Scotland. It should, perhaps, be remembered that the New Lighthouse (lit 1854) nearby has all the safety features in place and a viewing balcony at a height of 149 odd feet — over twice the height of the OB.

The Old Beacon is a Grade A listed monu­ment. In Historic Scotland’s criteria, they talk about exceptional circumstances for restora­tion — where it can be shown to be the most viable way forward for preservation of the monument as a whole.

Whatever proposal is submitted, it has firstly to be approved by Historic Scotland and, although they will consider restoration, their views regarding Grade A listed monuments, I believe, lean more towards conservation.

For example, as long ago as 1996, an offi­cial from Historic Scotland said: “the accom­modation block was deliberately un-roofed in 1809, it would not be appropriate to re-roof it now; that would be both unhistorical (since the tower in its beacon phase did not require a keeper), and it would also involve an unac­ceptable amount of re-building”.

Another statement from HS’s criteria says: “Restoration is also likely to be regarded as unacceptable at those monuments that are of outstanding importance for their scenic value in their existing state, that is, as ‘ruins in the landscape”.

Sustainability into the future is also a concern for Historic Scotland, and for other funding bodies, if major renovation is undertaken.

As Historic Scotland point out, what is required is: “. . . an informed understanding of the significance of the beacon and its con­servation needs”.

Conservation, for which Historic Scotland can give grants from year to year, could be done relatively quickly. Such grants would certainly be awarded for a monument of such importance as the OB.

If the necessary minor repairs to the struc­turally sound tower were carried out, such as pointing the structure upon which the ball rests; making safe the worn walk-way slabs (small pieces of flaking sandstone falling to the ground); and the relatively straightfor­ward conservation of the living quarters, then one would expect the OB to remain safe for the foreseeable future – over 200 years have passed without any maintenance and yet the tower is pronounced as “structurally sound”.

Such conservation procedures would avoid the large sums of money required for the Restoration Village idea (originally estimated to cost upwards of £2m) and all the plan­ning permission, maintenance and insurance necessary.

More than five years have passed since the BBC Restoration Village programme, without any decision having being taken about the OB’s future, although new ideas have been floated, such as use of the dwelling space as holiday accommodation, providing an 18th century experience, without water or elec­tricity, or developing it into a modern holiday cottage with four-star grade accommodation.

It is said that those suggested changes to the OB (now actually described as a potential goldmine) would: “breathe life back into the island and sustain this unique community and their declining way of life”. This so far unsubstantiated prediction does not consider the “aesthetic” argument con­cerning the monument – one which Historic Scotland continually brings into focus.

Would, for example, re-roofing the Earl’s or Bishop’s Palace, Noltland Castle, Skara Brae or any of the island brochs in Orkney, or other historic building remains, be acceptable or indeed allowed? As mentioned in my first letter, the sea has invaded the OB’s dwelling area on numerous occasions, and has been seen happening; a stone-built sheep “pund” (trap) only a few feetaway from, and adjoined to the buildings, has been severely damaged on numerous occa­sions and, indeed, twice fairly recently, with the sea obviously flooding the area.

This fact of sea incursion is mentioned in Peter A Tulloch’s book, A Window on North Ronaldsay, where he talks about a family who temporarily occupied the obsolete dwelling house having to twice “leave the dwelling hur­riedly when storms with high tides flooded their homes”. With the predictions of global warming and the subsequent rising of sea levels, sea-invasion will become an even more serious problem.

No doubt some form of protective struc­ture could be constructed to avoid flooding the “up-market accommodation”, but at what additional cost, with what guarantee of safety, and how out of keeping with the monument would it be?

Since 2006, and some years before, the North Ronaldsay Trust (NRT) (which is also involved with the future of the OB – leased for only 30 years to the NRT by the Estate) has completed the work of renovation of the New Lighthouse complex both inside and out.

It included providing facilities for the instal­lation of a wool-mill for processing the wool from the North Ronaldsay native sheep, which has been up and running, successfully, for some years.

But the main part of the project involved the restoration of two self-catering cottages, interpretation display, shop and a small restaurant. They are all beautifully finished, with the four-star status cottages available for self-catering bookings. The NRT is also involved in the ongoing renovation and maintenance of the two island churches.

The success of, and responsibility for, all of these projects is surely quite a challenge as we move ahead into difficult and unpredictable financial times.

Included among those establishments are eight self-catering cottages. Tourist accom­modation is important but, as has been said for the past 50 years or more, “what the island requires is houses, jobs and young families”. If this can be achieved then hopefully it might “breathe life back into the island….”.

Very encouragingly, just recently we learned that the OIC are apparently considering the building of a further two homes on the island.

There are many unsightly, derelict crofts on the island and an almost intact, but obsolete, grain mill that could be renovated.

Develop them, maybe, as restored, typical North Ronaldsay crofts that people could live in, and the mill in some positive way (possi­bly a working museum). At least they are safe from the sea.

More than five years have passed since the Restoration Village competition; the community, who should be consulted about the OB and the development of the island, could no doubt come up with innovative ideas for North Ronaldsay’s future without irrevocably altering the appearance of the monument and its spectacular setting.

What seems to me lacking, as Historic Scotland say, is: “an informed understanding of the significance of the beacon”.

Surely the evocative photograph taken by the photographer, Dawid Grudzinski, which accompanies this article, conveys wonderfully the magnificence of the OB as it has come down to us for a period of over 200 years.

Over those past 49 years, I have painted countless sea and landscape views of the island, and, over the years, the OB has often been the subject of my work.

Many a creel morning, late or early, rough days or calm days, my fishing partners and I have sailed past its monumental presence, set creels round it — not much more than a good stone’s throw from the tower.

It stands there like some great guardian of the past on that picturesque, untouched and iso­lated peninsula of Dennis Ness, unchanged for more than 200 summers and winters, watching over us and the passing years.

The thought of creating a painting of that familiar and inspiring monument with restored roofs and all the inevitable Health and Safety features surrounding the area is abhorrent to all my sensibilities.

The monument will be neither one thing nor another; neither fully restored nor fully con­served, for the very questionable and, as yet, unproven purposes of generating revenue.

In my opinion it will be done at the expense of compromising the timeless, commanding and mysterious presence of one of the great and enduring icons of North Ronaldsay.