This is November 23, and I’m sitting once more at my computer. Today has been as mild as a summer’s day, and even tonight the temperature outside is a surprising 50 degrees F. Yet only a few days ago the wind blew fiercely from the Northwest carrying flurries of short-lived snow and sharp hail that rattled the windows. And almost every other day it seems the rain comes ‘tuimin doon’. Such sudden, unseasonable fluctuations in weather surely do tell a story of climate change. Certainly winters are no longer like they used to be but then very little is.

I’ve just come in from having a look at the night – it’s mild as I mentioned, with a warmish wind blowing from the Southwest, and the moon is lighting up a cloudy sky. Sometimes she peeps briefly from behind busy clouds, and out to sea two well-lit ships are passing by. For some reason this night the appearance of the moonlit sky and sea reminded me of a picture we used to have hanging in our living room long ago. The thought of it takes me back at least 50 years and to the North Ronaldsay of those far off days.

The glass on the painting got broken many years ago and I was remembering that the picture has lain unseen in a curious little cupboard situated near the ceiling in my bedroom. Over the years its memory has haunted me a little for I have a vision of it in my mind. So I went straight from the cool of the night to my bedroom and now I have the picture at my side. It is more or less as I remember. The painting depicts a moonlight night at sea. The moon is partly hidden behind silvery cloud but still illuminates a bright path across the water. And in the near foreground two sailing ships, which look like fishing smacks, are outward bound. Their sails are dark against the sky, and near the bow of one an orange light sparkles warmly. How wonderful it would have been out at sea on such a night. Maybe one of the fishermen was playing a sea-shanty on his fiddle as the boat made passage to the fishing grounds of 100 or more years ago. The sound of the music would have travelled from ship to ship and far across the moonlit waves.

Before I tell you about our Harvest Home I must mention briefly a day or two I had on the Orkney Mainland. One day in Kirkwall I met two senior men in their seventies and eighties. One was a South Ronaldsay man and the other came originally from Stronsay. So there we were – three island men in their sixties, seventies and eighties, We had a great crack for a time about life in Orkney in times gone by and comparing it with today. I think the three of us agreed that old-fashioned neighbourliness –- when folk on the farms helped one another has almost gone. Machines do it all. And there you have it. Sadly, we also agreed that the Orcadian dialect is fast dying out as are the traditional crafts such as the work of the old blacksmiths, and all those diverse crafts practised on the farms of 60 or more years ago.

Thinking for a moment of old farming methods, one dark and rainy day I managed to visit the Corrigall Farm Museum just before it closed for the winter. There one travels back in time. I had a grand ‘discoorse’ with the custodian – in wreaths of blue smoke from a peat fire as we talked about this and that. Among many interesting old farming items in the building, I saw on the walls a picture of the Gospel Ship and a portrait of Burns. When summer comes again I must retrace my steps there for a proper visit.

And talking about the change from old to new, dare I say that virtually within feet of this award-winning, historical link with the past, rows of black plastic silage bales two-tier high stretch the length of the building and more. Stepping out from the front door the view of the Orcadian landscape is completely ruined. What, I wonder, would the ghosts of those who once farmed this old homestead think some early morning, when they rose out of their box-beds to look across the familiar lands of Harray with the hills of Hoy in the background?

Another day in Kirkwall – a Sunday in fact – my wandering footsteps took me along the sea-front as I walked to town from Craigiefield. The Cathedral bells were ringing their familiar notes that are forever stored in my memory – for many a day I have heard their music. By happy coincidence when I reached the front of the Cathedral it transpired that this particular Sunday was BB Enrolment Sunday which meant that the Boys’ Brigade and the Anchor Boys were on parade. Out of the Cathedral they all came and shortly formed up on Broad Street. Soon, with banners flying and led by their pipe-band, they marched away down the street and into Albert Street, and so on to their new hall up at Papdale. Well, I marched along with the company just as I had done in the Fifties when I was a member. I would have liked though, to have seen more discipline in the marching. But how very fine this all was, listening to the band, and seeing those young fellows following the pipes and drums with the same pride, I think and hope, that we old members used to feel. Before I came back to North Ronaldsay I once again, as I often do, made a visit to the splendid and majestic St Magnus Cathedral – the Cathedral of the people of Orkney. 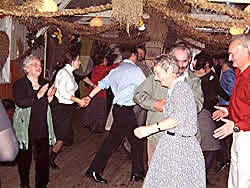 The floor is full as an Eightsome Reel gets into full swing at the North Ronaldsay Harvest Home. (Picture: Peter Donnelly)

Now then to our Harvest Home. On Friday, November 16, 82 folk comfortably filled the Memorial Hall. This, in fact, would be the 12th consecutive year that the old hall had seen again the celebration of the harvest. Once more, Loganair brought out to the island our many friends, relations, and guests, with some coming especially from far away. Captain Ian Potten was this year’s Loganair representative with vice-convener Jim Sinclair as the Harvest Home speaker. Unfortunately, Jim Sinclair’s wife was unable to attend, as were representatives approached from Orkney Ferries. After a delayed appearance one of our great Harvest Home supporters, and indeed of North Ronaldsay, finally arrived. This was Howie Firth, now living in Elgin, who made an apologetic entrance to handclaps, cheers and the stamping of feet.

Thereafter, proceedings quickly got under way. John Cutt gave the grace with the traditional supper following. Later, before the ‘toast’, I said a few words and announced my retirement as president of the community association and from the committee. After 12 years I felt, and said, that it was time for new blood and new ideas. I acknowledged the great support that I always received from each succeeding committee over the years – many of whose members had served much longer than I had. As a relative latecomer to association affairs, I had held the banner for a few years. Others, over the long history of firstly, the Old Hall Committee (1920-1948), and then the Community Association, had served just as conscientiously as I had attempted to do. I promised to help with future functions, and then proposed a vote of thanks to my colleagues and all others who help, and for those who were involved in any way with this year’s Harvest Home.

Jim Sinclair was then invited to address the company. He had grown up with, as he said, the more old fashioned harvest work during the Forties and Fifties – work which is now almost a thing of the past in Orkney. He went on to reminisce about those days and during World War Two when several hundred servicemen were stationed in Shapinsay. Some-times, their genuine attempts at helping with the farming activities were not always successful. When binders arrived in Shapinsay as long ago as 1912-13 his farm was among the first to acquire one. The sheaves were then, of course, mechanically tied. Occasionally, though, he remembered flattened crop being cut by the reaper, forerunner of the binder, which left the cut swathes to be bound into sheaves by hand. He described how on fresh, sunny days it was wonderful to see the binder sheaves fall, one by one, into long lines lying ready to be stooked. Often nearby, he would watch gannets dive with spectacular effect into the sea as they fished for food. But he mentioned other more unpleasant days – tangled crop, cold, wet days and so on, which were also to be endured. These combinations of images, along with memories of cups of tea and grand spreads of food being served in the hairst fields, the satisfaction of working together, of neighbours helping, made those times of the past great memories to treasure. Today machines have replaced all the old ways, and thereby we have lost an age when real human values were part of everyday existence. Jim then proposed the toast to the harvest. Fine drams of whisky sparkled briefly in the light of candles and barn-lanterns before disappearing rather neatly and bringing this most pleasant part of the Harvest Home to a close.

In an instant candles were ‘slocked’; the beautiful displays of carnations (created once again by D. & H. Glue) and the lanterns were deposited safely in the ‘little end’. Then outside we went with the long tables, dishes clattered in a cleaning ritual, slipperene got dusted on the old hall floor, and shortly the accordions were in business as the standard first dance, Strip the Willow, filled the space from the south to the north end of the hall. And so one of our best Harvest Home dances began and continued through the evening until the draw for the raffle took place. This raffle was organised in aid of substantial funds required for window replacements in the Memorial Hall. Ian Deyell supervised the raffle for which people had kindly donated numerous bottles of whisky, wine etc. Those items, along with one of my watercolours, which I had contributed, raised a sum of £273. Further donations brought this figure to a grand total of £300.

On went the dance as energetically as ever (no time for tea) as the night swept on to the music of accordions and Howie Firth’s recorder. During a brief interlude Howie entertained the company with an amusingly topical Harvest Home composition, (including a chorus) which he sang to quite an original tune. And then before we had time to think, between three and four in the morning, the second last dance was announced. Another Eightsome Reel was the choice, which shook the hall with (again) four sets dancing madly to the skirl of the pipes. Finally, the last waltz and Auld Lang Syne brought the 2001 Harvest Home almost to a close but not before Jim Sinclair was carried shoulder high round the silvery floor of the hall. Then I was also raised to the realms of the simman garlands and coloured buoyheads before hot soup, sandwiches etc was served to round off an unforgettable night. A little later the old key of the hall finally clicked in the darkness of the night.

“This is the land whereon our fathers wrought
Year after year, feeling scant need to clutch
For distant gains, since, with little or much,
They tilled their scattered fields as they’d been taught,
Or tried the sea to find what might be caught
Of fish or crab. This was their land, and such
Their joy therein, and seeing the sunlight touch
Its evening hills, no other land they saught.”