Here we are at almost the end of another year with Hogmanay and the New Year only a few hours away. By the time this letter appears in print it will be 2004. So I send my good wishes for the New Year.

Well, since last I wrote, North Ronaldsay has been enjoying the usual Christmas celebrations. On the evening of 17th December a Carol Service was held in the Community Centre when a few of the old familiar carols were sung. The North Ronaldsay Primary School’s pupils participated, with scripture readings and singing under the direction of head teacher, Patricia Thomson. She also conducted the short service and accompanied the singing on keyboard. Tea and Christmas pies followed. Incidentally, the school pupils had earlier been in Kirkwall to see the Pantomime ‘Babes in the Wood’, performed in the Arts Theatre.

The following day, the yearly Christmas dinner (provided by School meals) was enjoyed by a large turnout, which included many visitors to the island. Winnie Scott, school cook, supervised the elaborate proceedings. Afterwards, folk made their way into the school classroom, which had been transformed into almost a little theatre with seats arranged in front of a curtained-off stage. There, hidden behind a puppet booth, the four school pupils, Heather and Gavin Woodbridge, Duncan and Cameron Gray, operated puppets (which they had made) in a presentation of Goldilocks and the Three Bears. Dialogue and singing had been pre-recorded thus allowing the puppet operators free reign. The presentation was greatly enjoyed. Later, the pupils received certificates based on their good efforts, and good behaviour throughout the term, and they also received gifts in acknowledgement of their achievements.

Christmas Eve saw the traditional children’s party. This year there were many children present due to the numerous visitors on the island. All enjoyed the fun which was followed by a splendid assortment of sandwiches, homebakes etc. Santa was as mysterious as ever with Winnie Scott as his faithful attendant.

Next on the menu – so to speak – of Christmas celebrations was a locally produced Pantomime, which was followed by a dance. This end-of-the-year get together took place on Saturday 27th. with well over 60 folk present. Peter Donnelly, the Association’s President, welcomed everybody and introduced Sydney Oglivie who briefly explained the background to the play and the dedicated efforts of all who were involved. Sydney was the inspiration and producer of Snow White and the two Dwarfs. Actors were: Sydney Oglivie (Dwarf), Anne Oglivie (The Butler), Norman Bayley (Dwarf), Winnie Scott (King), Joni Craigie (Nuff the Good Fairy), Paul Brown (Stepmother), Lucia Shaw (Huntsman and Prince Hero) and Isobel Muir (Mirror). Carole Bayley acted as narrator and Edith Craigie was the behind-the-scenes assistant. The production was great fun with audience participation adding to the enjoyment.

A good little dance soon got underway made all the more lively with the presence and energy of quite a few younger folk – both islanders home on holiday and visitors. The many additional folk on the island for Christmas all participated very well, making the dance a success – though often the dancers had to simply fly. There was a short break for refreshment after which the dancing went on until about two in the morning. 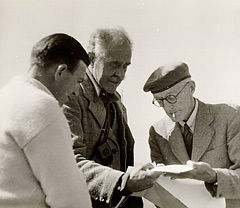 A famous visitor to North Ronaldsay – but what was Michael Powell doing on the island? He is pictured (left) with author Seton Gordon and the island’s medic Dr W. Dawson.

Recently, I have been reading a book by a well known Scottish writer of the past, Seton Gordon, and illustrated by Sir D. W. Cameron R.A. The book, one of many travel books he wrote about Scotland, is called ‘Highways and Byeways in the West Highlands’ The book was published in 1935. It is an account of the author’s trip down the West Coast beginning at Cape Wrath and finishing with a look at Loch Lomond. The text is beautifully written and includes historical background, legends and snippets of other travellers’ tales, such as Boswell and Scott.

One of the islands described is Jura, a place I visited some years ago now. I was sketching there for a week or more and lodged about halfway up the island, with a gamekeeper and his wife and family. Well, that was interesting. I was able to see inside one of the lodges in Lord Astor’s estate where very rich sportsmen spend hundreds of pounds – even thousands – each for the sport of shooting deer. Very grand were the set tables with silver cutlery, crystal etc. Then there were the poisonous adders (I only saw one); the annoying little ticks that sucked blood and itched like the very ‘diel’ (a dab of methylated spirits made them ‘let go’); the biting midges; the goats and deer. And there were all sorts of beautiful insects such as the colourful fritillary butterfly, stunning, delicate blue-winged dragon flies, brilliant green beetles, bright green frogs and burnished, copper coloured flies. More frightening, but harmless apparently, was a huge dragonfly with a large body and a wing span of at least, I’m sure, three inches that came whirring like a helicopter round my head.

One day I climbed one of the Pap’s of Jura – of which there are three. The three mountains – for such they are described – vary in height from about 2,300 ft to 2,600 ft. Unfortunately, a dense mist came down which ruined the otherwise magnificent view I would have had of the surrounding mountains, islands and the mainland of Scotland. On too many nights I was obliged to visit the main pub at the south of the island – not to have done so would have been bad form. My host, with whom I lodged so comfortably, simply loved a visit to the pub. I do not think I have seen whisky consumed by all and sundry with such ease and in such quantities. I was forced to play a careful balancing act practising diplomatic generosity as a play-off against suffering ‘mortal illness’ the next morning. I survived, and managed to fill a sketch book or two, eat venison, collect a few antlers as souvenirs, and see the house in the distance (up north) where George Orwell wrote his classic, ‘Nineteen Eighty Four’ All in all, I really enjoyed my Jura visit.

By the way, Seaton Gordon visited North Ronaldsay in 1951 along with the famous film producer Michael Powell. In any case he presented the then Doctor on the island, Dr. W. Dawson, and his wife, with the book I’ve just been reading, in acknowledgement of their kindness and hospitality during their two day stay.

Whether Michael Powell was looking at North Ronaldsay as a possible site for a film we do not know. In 1937 he had made the film, ‘The Edge of the World’ on the island of Foula – the story of the evacuation of St Kilda. Anyhow, I have this book on loan from Mary Shearer (nee’ Dawson), Dr. and Mrs Dawson’s daughter, and must return it along with some excellent photographs taken during their visit – probably photographed by Powell.

One was of the fine seaman, Johnny o’ North Ness, whose life-saving exploits I wrote about in my account of the loss of the Norwegian MV Mim in 1939. His photograph appeared along with the article, which was published in The Orcadian about a year ago

Another day will be Hogmanay and I see the moon is gaining extra light every night – just the sort of moon phase that the old Linklestoon (my toonship) men would have liked. It would have made their Hogmanay and New Year visits relatively easy as they travelled on foot from house to house. Never does this time of year come round but I recall those past days.

Maybe, just maybe, on the ‘heuld’ o’ the Hogmanay night, when I’m settled comfortably in bed, I shall hear a ghostly ‘chapping’ at Antabreck’s door and into the house will stride the Linkletstoon men again to relive those great days of yore. I will hear once more the familiar voices of past generations.

On the table, I know, will be a large ashet filled with the mutton of our native sheep and ‘jugs’ of home-brewed ale; the old ‘modern mistress’ fire will be crackling and burning brightly; and moving round the company will be my parents busily filling up the ale cans or serving this and that.

As the ghostly company warm up to the occasion a song or two will be sung. For sure my father will be singing ‘A Capital Ship for an Ocean Trip’ with the favourite line ‘I’m off to my love with a boxing glove ten thousand miles away’ and Arnold o’ Greenspot will be having a go at his very own song about the Angels way up yonder – I never heard him sing anything else.

There will be more singers from time to time or all together – Johnny o’ Purtabreck (senior), Johnny o’ Barrenha, Johnny o’ Waterhouse and others – all will add to the entertainment singing such songs as, ‘Tipperary’, ‘The Rigs o Barley’ – Corn rigs, an barley rigs, or ‘Bonny Galloway’. Then, after much persuasion, Willie o’ Waterhouse (senior) will sing, wonderfully well, the old Scots song, ‘The Braes o’ Balquhidder’.

“Will you go, lassie go.
To the braes o’ Balquhidder?
Where the blae-berries grow.
Mang the bonny bloomin’ heather”.

His face will be all a-glow with the night’s celebrations – Antabreck being the last of the ten or so houses visited – and there will be a twinkle in his eye as he sings that song and more.

And if, in this world of make-belief, I dare venture through to the festive room to take my place among the company, every step I take along our connecting passageway will shed away the years until over 40 have flashed past.

But as I open the ‘but’ door, in an instant – as fast as one could ever blink an eye-lid – all the company will disappear and the room will be empty and dark save for the light of the moon which will be creeping in through the corner of the west window, and, like the words of the song, about the great sailing ship far away on an ocean trip, those days will be ‘ten thousand miles away’.