Yesterday, January 1, 2002, to the music of a fiddle played by Kelvin Scott, over 30 revellers danced round the old Standing Stone. Shortly before, with a bottle of the Famous Grouse whisky, we had toasted in the New Year, and watched the winter sun set behind the hills of Eday. 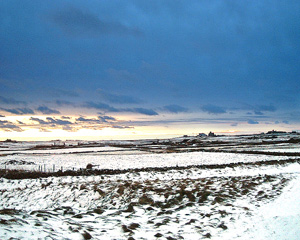 Can anybody think of a grander way to bring in the New Year than by wishing one another good luck, success; and watch the setting sun together, remembering for a moment those folk who, many thousands of years before, had erected the stone. As we left the scene, followed by a group of young cattle who had eyed our performance with considerable curiosity, sweeping clouds in the south west glowed in spectacular colours of orange and red.

At Neven, shortly afterwards, we ‘discoorsed’, ate cake, and sang songs to the accompaniment of fiddle, accordion and mouth organ. Liz Forgan and Rex Cowan, our hosts, proposed another two entertaining toasts. So, you see that even that old Standing Stone can bring folks together in harmony and enjoyment. Do you know I think we could do with some more stones dotted here and there round the island and elsewhere.

Well, I’ve made an early start to my end of the year letter. Outside the wind is blowing very freshly from the south, and the moon, just beginning to wane a little and encircled in rainbow colours, is riding high in a cloudy sky. I think that for tonight I will close down my writing machine and aim at an earlier start tomorrow.

Today, when I came in from my outside chores, I heard a curlew cry. The sky was beautiful as the sun began to rise. Clouds, coloured orange and pink, changed into gold and yellow as the sun climbed clear of the horizon and gained height above a ruffled sea. Yes, it is a fine ‘drouthy’ type of day, and a welcome change from snow and ice and the very wet conditions of recent weeks. It would be grand to have a few days of such uplifting weather. We could arrive more easily at some New Year resolutions I think, and march forward with renewed determination.

How quickly Christmas comes and goes and the New Year celebrations likewise. In the old days there would still be some good bottles of North Ronaldsay ale in most houses to welcome New Year visitors. Shortly, I shall have to be stepping forth in order to get my own visits completed before Old New Year’s Day on January 13. Remembering old customs for a moment, it’s pleasant to think that the folk in Foula still actually have a special celebration for January 13 – one which goes back far into their history. And talking about that very isolated island I have just got a book called The Isle of Foula by Ian B. Stoughton Holbourn, first published in 1938. Professor Ian Holbourn bought the island about 100 years ago. When he died in 1935, he left vast amounts of unpublished writing on a very wide range of subjects. After his death, his wife, Marion, put together the book using her husband’s notes on Foula more or less as he had written them. On certain clear days this Ultima Thule, which lies some fifty or so miles distant to the north, can be seen from North Ronaldsay. Not many years ago a few islanders from here visited the island by plane. Maybe we could arrange such a visit again to see how such an isolated community manages its affairs, and how life has changed since the 1930s.

Going back just a step or two into last year to remember community events. A whist drive raised over £100 for the children’s Christmas Eve party. On December 19, the pupils of the North Ronaldsay School presented a fine programme of carol singing and readings. And then, at the grandly festive Christmas dinner, cooked by Winnie Scott, head of the school kitchen, folk were entertained once again by the children. Much work had gone into a production of a short sketch entitled ‘Mr Howard Carter’s Discovery’. Mr Carter was a British archaeologist who discovered the tomb of the Pharaoh Tutankhamun. This very professional production involved all the pupils – Joni Craigie, Richenda and Thomas Brookman, Heather Woodbridge, Duncan Gray, including the two pre-school children Cameron Gray and Gavin Woodbridge. It also involved sterling work from head teacher, Patricia Thomson, support teacher Jackie Milner, drama advisor Chris Giles (both from Kirkwall) Anne Ogilivie, pre-school assistant, Edith Craigie, auxiliary, and Isobel Muir coming back from retirement to act the part of Mr Carter. After each function folk enjoyed suitable refreshments. On Christmas Eve there was the traditional and entertaining children’s party which in the old days was referred to as the “bairns’ Christmas treat”.

Then came Christmas, with snow and ice and a bitingly cold wind from the northwest. At the Memorial Hall on December 30, about 30 folk somehow got seated on old forms set up on the curtained stage. Heaters made the confined area cosy as we watched an innovative puppet show organised by Helga Tulloch for the children on the island. The show was loosely based on the activities of Ragna of North Ronaldsay -a ‘great lady’ of Viking times. Helga and Georgette Herd brought the puppets alive, with Chris Sutcliffe, narrator, and Scott Tulloch, stage assistant. Lemonade, biscuits and festive drams were served at the finish of the performance. By Saturday the icy condition of the roads forced a postponement of the island’s traditional end of the year event until Hogmanay. On this night quite a number of visitors to the island ensured a good attendance at the last dance of 2001. The Community Association’s new president, Peter Donnelly welcomed everybody and set the proceedings in motion. Two short films were shown as a video but projected on to a large screen by special equipment kindly lent from the Kirkwall Community Centre. The films which had been made in 1934/35 were entitled, ‘The Rugged Island’, a Shetland Lyric, and ‘Eriskay’, a Poem of Remote Lives. The films, whilst conveying the romantic side of island existence, also very beautifully depicted the way of life on those islands almost seventy years ago. Rex Cowan then gave a short talk, illustrated by a video, in which he explained the changes in underwater archaeological exploration. In the early seventies his team of divers had discovered and explored, the wreck of the Svecia owned by the Swedish East Company and lost on the Reef Dyke in 1740. At that time, as Rex said, exploration methods were much less advanced.

The dance which followed, with upwards of 70 folk participating with enthusiasm, proved a special success with a great Eightsome Reel taking us near to the midnight hour – Sinclair’s pipes fairly swept us on. Then at a little ceremony just before the turn of the old year, Peter Donnelly, presented me with a beautiful Seiko watch and a leather hand-bound illustrated edition of the complete works of Robert Burns. Those two very fine gifts, both inscribed, were given on behalf of the island by the North Ronaldsay Community Association. He went on to mention my 12 years as president of the association and the work I had done in that time. Although I felt that this recognition was far beyond my contribution, I could only graciously accept the two very splendid gifts being able only to say thankyou, but my thoughts were away back through those years. Remembering the little ups and downs, the special events that we had conceived together and the fun that we’d had. But especially I remembered the work and support of so many others – during my time and long before – whose help and commitment often goes unmentioned and unrecognised, but whose contribution makes collective efforts possible and ensures success. Tea, sandwiches, and all sorts of homebakes were then served as the old year slipped away.

Ian Deyell counted down the last seconds of 2001. Then at twelve midnight the hall hummed with all sorts of good wishes as folk moved around to shake hands with one another. Shortly, the dance swung back into action with Ann and Lottie’s accordions going at it, and also in fine form was Kelvin with his fiddle. I played along with them adding to the volume of the music and so on went the dancers merrily indeed with the second last dance being the favourite Strip the Willow. As the music increased in tempo, arms and legs flew in all directions with ‘yoochs’ and ‘skreeks’ sounding more and more frantic. That was the way to bring in the New Year before the last waltz with the sadder music of the old Scots tunes – The Rowan Tree, The Four Marys and Loch Lomond, reminding us of other times. Robert Burns’s universal song was then sung to bring a great night to a close.

Well, I’ve almost come to the end of my letter. Today has been another dry and fine winter’s day with a very fresh, southerly wind – I say today – but I see with a shock that it is now almost 3 o’clock in the morning. What in the world is to become of me if I continue like this I can hear people say – I shall certainly have to nip 40 winks or more through the day. You know at 61 who cares. I’m about to have a look outside – as I have a chore or two to do. Then I’ll tell you how the night is.

The night is fine with that fresh wind still blowing from the south, and the moon, now half spent, is hiding and peeping from among dark clouds that come and go against a hazy sky. Only a very bright star or two shines palely through the mistiness of the night. As I looked round the island at such a late hour, the one light to be seen was that of the Lighthouse as its long beams swept slowly round, and round, in an anti-clockwise direction – why does it turn anti-clockwise I wonder? I thought for a moment about our recent activities and the passing days. There were many memories to turn over in the mind. All those events described above, the white Christmas as it had transpired to be, with the sharp brilliance of a full moon lighting up a spectacular snowy landscape; magnificent sunsets behind islands sometimes purple or blue, and at other times partly covered with snow; the sight and sound of heavy northerly seas hammering past to the west, and east of the island with the white of the waves luminous and a little frightening in the night. The thunder of such seas could easily be heard even within the confines of one’s home. Then there were the sometimes marathon and very lively parties at various houses, one or two of which I managed to attend. There was the inevitable gossip; the differing opinions and versions of events both past and present; and often the intense talk and speculation about North Ronaldsay and what its future might be.

Well, what indeed will it be, or rather what can it be? That is the question! Ragna, mentioned above and described in The Orkneyinga Saga as a wise and self-assured woman, once had a verbal exchange with Earl Rognvald, which resulted in an error of judgement on his part.

Ragna said: “Now the proverb comes true that ‘few are so wise as to be able to see everything as it is’. . .”

Perhaps, if we were all as wise as Ragna we might arrive at solutions to some of the problems that beset many small communities – especially those like ourselves that live at the periphery of society.