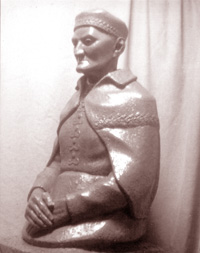 A sculpted portrait of Ian's grandmother which he made in 1964. She often told the tale of a tragic accident when a girl was caught up by her hair in a horse driven mill.

From day-to-day lately I have been out with my scythe cutting weeds. This is the time of year to set about the nettles, dockens and creeping thistles.

A relative of mine in Sanday tells me that when she came on holiday in summers of the 1940s, she and others were given special hoe-like tools with which they had to remove thistles and suchlike weeds from fields growing with oats or bere.

One day when I was at war with the weeds, I saw, in an area of miry ground, where I know I have a creeping thistle or two, that the ragged robin and lady’s smock are beginning to come into bloom, where earlier in the summer the marsh marigold held sway.

A few purple marsh orchids are also to be seen. They are simply a pleasure to the eye, and being so few in number are all the more to be enjoyed. Cloth of this striking purple colour was, and still is, worn as a symbol of royalty or high office.

I think this was so in early times because the colour was particularly difficult to obtain – was it originally (I seem to recall) made from a certain species of snail that were not too common?

The Roman emperors certainly wore robes of purple, as did others of high rank in other civilisations. It is also a familiar colour in the apparel of bishops, cardinals and others of such standing.

Well, well, in my last letter I briefly mentioned the island wedding which occupied folk’s minds for a spell.

No, it wasn’t really a traditional wedding, but maybe it was as near to it as generally can be managed today.

Remember, in my letter, I mentioned a barn wedding that I was at in 1947 – Bobbie Thomson (Peckhole), now living in Rendall, tells me that he played the pipes as the bridal party and guests walked from the kirk to the bride’s home all those years ago.

I also quoted from Ernest Marwick’s account of weddings in Orkney around the early 1800s.

Interestingly, in her book Island Saga, Mary A. Scott gives a good account of a wedding in North Ronaldsay in past times: there were the pre-wedding traditions and weeks of brewing ale.

She talks about a Thursday wedding (as did E. Marwick); of guests bringing whisky and food – chickens, scones, oatcakes etc; how sometimes the marriage ceremony was held in the church but quite often in the bride’s house or sometimes even in the barn.

She mentions the guests’ initial welcoming “dram” of either whisky or wine. The wedding feast and dance was held in the barn, with tea and refreshments served in the “ben end” to the older folk during the dancing.

Then she mentions the “grand march” led by the bride and bridegroom and the best man and best maid; the bridal quartet danced a Scots Reel to begin the night’s dancing, which continued with refreshments and singing, well into the “wee sma oors”; the Bride’s Reel danced as North Ronaldsay’s own A’aksome Reel which took place towards the end of the evening.

The last ceremony, she says, was the passing round of the “Bride’s Cog” – a kind of punch made up of whisky, hot ale, and perhaps a little rum, with pieces of oatcake thrown in.

A night or two later there was the “back-treat” when those who had been particularly helpful during the wedding were well entertained (after my late mother and father’s golden wedding in 1986 they had a “back-treat” which lasted until the dawn was in the sky).

This occasion could be, as Mary says in her book, the merriest evening of all.

And talking about golden weddings, I remember a little of my grandparents’ golden wedding at Cruesbreck (1948) – in particular the cake which had gold decorations and which for a time was placed in the ‘seller’.

This room was a sort of store where milk was kept, cream saved for churning; where girnels for storing oatmeal or flour were, or where, in the winter time, a sheep’s carcass might be hung.

We younger folk were greatly entranced with the cake and the idea of a golden wedding.

But back to weddings. The aforementioned relative in Sanday recalls my parents’ wedding, which took place in 1936 at the same house.

She remembers the dancing and especially the continuous cups of tea, etc served in ‘ben’ or the ‘by-hoose’.

This was a July wedding and the day ordained was one of dense fog – so much so that the bridesmaid on her way to North Ronaldsay from the south languished in Sanday as the post-boat was unable to cross.

Imagine the disappointment of such a calamity!

This meant that another bridesmaid had to be found.

Some 50 years later, the first bridesmaid, my father’s sister now aged 89, was able at last to take her place as the golden wedding bridesmaid. In addition that day, as a result of the fog, a motor trawler called the Bohemian Girl, bound for Iceland, went ashore at Bridesness (she was later taken off by the SS Earl Thorfinn).

My parents’ wedding and reception was held in Cruesbreck’s barn, as was my mother’s sister’s wedding (1927) though she was married in the kirk.

After her marriage, folk left the kirk in twos led by a fiddler and marched the mile and a half or so to her home.

At all the weddings of that period, and before and up until the early 1960s, when brewing came to an end as a result of the closing down of the mill, home brewed ale was the sustaining drink.

And when weddings took place at the smaller houses it was not at all uncommon to have more than one night’s celebrations – folk would say they were invited on the second night, or third, or even later – but this could sometimes happen in any case.

For more detailed descriptions of weddings held on the island, of the above period and later, there are a few accounts written in The Orcadian and the Orkney Herald.

And for earlier times, I have just been re-reading John Firth’s wonderful account of courtship and marriage in his book Reminiscences of an Orkney Parish. There you will find the definitive, and most entertaining, description of a traditional Orkney wedding of around the mid 19th century.

Remembering my grandmother (1870-1966) I recall that she used to tell us of a tragic accident which took place in the same barn where those joyous events occurred that I’ve just been describing.

This happened in 1876 when a young sister (aged eight) of her husband-to-be, was killed when she got caught up by her long hair in the gearing system of the horse driven mill.

Such an accident must have been quite devastating and shocking for the family. It was she also that talked about the custom of dancing round the standing stone.

Her mother might have told her about this tradition since she would have been alive at the time of the Rev W. Clouston’s observance of folk dancing round the stone on New Year’s day – mentioned in the Statistical Account of 1795-1798.

Another story my grandmother often told was of her journey to Chicago (1895), made when she was in her early 20s.

A North Ronaldsay couple – a man from Purtabreck and his bride from Cruesbreck – who had gone there in the late 1800s had a child, but the mother died shortly afterwards.

A decision was taken by relatives to bring the child back to North Ronaldsay. This entailed a long journey which most likely meant leaving the island by sail-boat to cross to Sanday and from there by steamer to Kirkwall.

Then, from Kirkwall to Aberdeen or Leith by sea and on by train to Liverpool. My grandmother had two other islanders as travelling companions – one from Dennishill, and the other from Waterhouse, but before arriving at Liverpool to catch a steam ship across the Atlantic the man from Waterhouse died suddenly on the train.

This traumatic event of course involved the police and other complications. However, the return journey, with my grandmother this time accompanied by the child’s father (who returned to the USA), was completed, and the child grew up at Cruesbreck.

She left the island in 1910, trained as a teacher, eventually settling in Sanday where she taught for some years. She became the mother of my informative relative living in Sanday.

That last sentence above, you will see, brings me back to my first paragraph and finally to my last so there we are.

Silage is being made and grass for hay and wrapped bales will be cut shortly. As I write, well past midnight, this is the beginning of the longest day.

I think that over these past few days we have been suffering the ‘ku-kwacks’ (stormy, blustery weather that often comes in May) for the wind has been persistently strong and ‘fore-by’, heavy rain has fallen.

Usually this sudden turbulent weather occurs in May, but if it misses May then June can receive a pounding just as well.

Earlier today, I visited the gardens of Holland House, where the wind in the trees sounded like stormy weather at sea.

And when winding one’s way through the extensive fuchsia trees, a carpet of dislodged crimson flowers with their little wraps of purple made an unusual path – almost like some grand Arabian carpet.

The trunks and branches of the fuchsia and the sycamore trees swayed and creaked eerily in the strong south-westerly wind.

In certain secluded areas where nothing can be seen but trees and a bit of sky, a canopy of green leaves waved like 1,000 flags, sometimes bright and translucent in the sudden flashes of sun and at other times a deeper green when flying clouds darkened the sky.

One branch of fuchsia was quite spectacular inasmuch as it was an absolute blaze of uncountable crimson flowers. I had to look at it for a minute or so, for such was the ‘stunningness’ of it.

All around little linnets were calling, and darting here and there, and through all of this mixture of the senses, sounds and colours, a blackbird began to sing.