Well, this is a Sunday. It’s a day I like to have to myself – in as much as that desire is possible – and I try to put the thought of ‘one hundred and one’ jobs, which are waiting to be done, into the background. You know, that as the folk on the island become fewer and fewer, and as we get a little older, it’s becoming clear that majority of those jobs will simply never get done. The very thought of them is enough to haunt, and trouble the mind – at least with me that is the case. Interestingly, only today I heard that North Ronaldsay could do with at least one incoming family who could take on some of the extra chores. Such a thought had also occurred to me and I’m sure they would find numerous requests for help that would keep them in work. Mind you, they would have to be quite versatile – almost jacks of all trades.

In the old days, and not even that long ago, each house had a fairly large family living together. One has just to look at the six censuses (beginning 1841) that have recently been published. For example, families of six, eight, 12 or more sharing a home was not at all unusual. In fact at one particular house on the island it was said that 21 folk lived together for a time. In each home there were folk to look after the older or younger members of the household, folk to share the work of the croft, to help neighbours, and to organise this and that. It’s difficult to imagine an island with a population of three or four hundred or more, as it would have been in those days.

But back to the present. The spring and early summer work is over: a little ploughing, sowing, rolling of land for silage and hay – a process which helps to avoid damage to machinery, spreading artificial fertiliser and so on. And on matters more social, as part of their term’s project studies, the North Ronaldsay school pupils have been in Rousay for a few days looking at the fish-farm, seashore, archaeological sites, etc. Here on the island, on Saturday June 1, celebrations for the Queen’s Golden Jubilee were combined with communal work which provided a constructive focus for the day.

Of course communal activity is an integral part of North Ronaldsay’s history. Such work has always been very much related to, and is still practised with the management of the native sheep. In the spring the five ‘toonships’ would be busy maintaining their allocated portions of the twelve to thirteen mile long sheep dyke. That work has lapsed today with the much-reduced work force but nevertheless areas requiring immediate attention are repaired – it has to be, otherwise the island would be over-run with sheep. Then the various chores connected with sheep management would follow: bringing in ewes from the foreshore for lambing, the punding (gatherings) of sheep for clipping, removable, etc.

A few years ago, readers may remember my account of the rebuilding of the sheep dyke when large areas were devastated by storms. At that time islanders turned out to work day after day. And so it goes. In the old days folk who were roofing parts of their steading with heavy flagstone usually had a team of helpers – in fact many homes were built that way. The two Kirks, dating back to about the mid 19th century, would have been erected mainly by communal labour. And when Captain Fresson was pioneering the first air service to the northern isles in the 1930s the whole island turned out to clear the proposed runway. So, when the time, opportunity and circumstances all connect, much can be achieved. Differences are put aside and aims are accomplished.

This little account brings me back to the island’s celebrations for the Queen’s Golden Jubilee and goes some way to explain the background to the work undertaken on June 1. At a recent meeting of the North Ronaldsay Community Association, the committee decided to combine the repair of the Session House roof of the New Kirk with their various celebration activities. This was one of the aims of the North Ronaldsay Trust, who now own the building and who hold it in trust for the island. So on Saturday, June 1 at 10am work began.

One team set about removing the welsh slates, others conveyed them to another group who busied themselves chipping away the cement/lime adhesions and the broken rusted nails. Yet others weighed, graded and put those slates saved into appropriate piles. Throughout the day refreshments provided by the Association were served. Then back to operations until everything was ready for ‘sarking’. Hammers tapped away on the roof as boards were nailed to the couples. On the ground others finished their tasks and tided away this and that. By about 6.30pm the sarking was complete and one side had been felted. A total of 38 folk, which included former islanders back home for the celebrations, and a few visitors, had helped in one way or another to accomplish quite a surprising feat of work.

A few years ago a similar effort was made when the storm damaged roof of the Memorial Hall was repaired. Both are special buildings which hold a great part of the islands history in their very fabric. Within the walls of both, the lives of many islanders have been influenced and shaped in one way or another: Sunday school days, marriages and all the other activities that were once prevalent in the life of the Kirk, concerts, weddings, dances, children’s ‘treats’, and the many memorable events that took place in the Community hall. 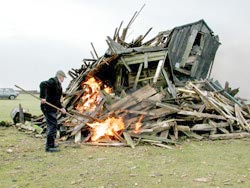 But to return to the Golden Jubilee celebrations, the next venue very soon after the Session House repairs was the bonfire site at Dennis Ness. Patricia Thomson organised various fun events for children and adults – egg and spoon race, three-legged race, sack race etc. The island’s most senior man, John Tulloch, Sennes, was invited to light the huge bonfire. The blaze was spectacular, and it burned away long after the last game had been played and the last spectator had left.

A little later, folk collected at the New Community Centre, which had been decorated with yards of brightly coloured bunting, flags, and bunches of red, white, and blue balloons. In addition the school pupils had made suitable decorations including large gold painted figures of 1952-2002 to signify the Jubilee. After a time folk arrived at the Centre, and shortly they began to partake of a magnificent and beautifully presented buffet mostly prepared by Anne Ogilvie. Shortly afterwards, Peter Donnelly, president of the NRCA, welcomed everybody and began the proceedings. He thanked his committee and all helpers who had been involved in any way with the day’s events. Peter then presented John Tulloch, Sennes, with the specially minted, and boxed, silver five-pound coin. The school pupils and other young folk also received this commemorative Jubilee momento. Peter and Ian Deyell followed the presentations with the raffle, which comprised a bottle of Highland Park whisky, kindly donated by Bruce’s Stores, and a commemorative £5 coin and a box of chocolates donated by the NRCA. Tea and homebakes were served and for a very pleasant little spell folk simply sat around and talked. Eventually, in the very colourful surroundings, the dance got under way to the litesome music of accordions and by one thirty in the morning, some fifteen and a half non-stop working hours after the first welsh slate had been removed from the roof of the Session House, a memorable day indeed came to an end.

Well, that’s the island news, or as much as I can remember at the moment, but today, especially, I’m thinking of less joyful events. Not so long ago the island attended the funeral of a new islander, Vera Osmonde, who died on the first of April aged 78. And yesterday, Monday 3rd my brother Walter, aged 54, passed away. Only on Saturday he had sat in a car watching the repair work at the New Kirk.

So here I am sitting at our front window finishing this letter early in the morning and looking out across green fields to the east sea. So far, it is a beautiful day. High cloud is moving slowly in the south-easterly breeze and the sea is sparkling in the bright morning sun. The sound of summer is all around. A little wren is singing from a hidden stance nearby, and my favourite songster, the elegant blackbird is whistling as only he can whistle. In the air there is the smell and sound of the restless sea. It’s almost always to be heard, and many a memory it can bring back to those of us who live on this island of North Ronaldsay. Its dominating presence is with us through every day of our existence, the days of our youth and adulthood, days of fun and days of sorrow. But this day, despite the music of the island that comes stealing in through a half open door, there is sadness in the air.