On my living room table there are two particular reminders of jobs to be done. One is a little book in which I made a few notes about the school’s open day, held just before what used to be called the tattie holidays.

The other is a lovely display of red carnations created by D. & H. Glue for the recent harvest home. I have taken the liberty of keeping one to remind me of a grand occasion.

Before I begin, I must tell you that I am still sleeping in one of our attics. I moved there to allow for extra accommodation at the time of the island wedding reviewed in my last letter.

It’s especially enjoyable, to fall asleep with the stars shining through the room’s skylight; or when the moon is in the west and she illuminates my room with a silvery light.

If the weather’s fine and my little window is partly opened, another pleasure is the sound of the sea, and the occasional cry of a curlew or lapwing. Even the wind, when it gets the chance, plays around my face and gives one the vivid feeling of actually being outside lying underneath starry skies.

In my last letter I mentioned the beginning of the harvest work. After the shearing and stooking up of my crop of oats there were windy days, damp and rainy days when, from time to time, I had to set up, all over again, the stooks that were badly battered.

On September 27, a good day came and we built three stacks and a ‘diss’ — a word from the Old Norse which means a small stack.

During the following two days, a jolly team of workers took up my neighbour’s tatties — many hands made light work as the last fruits of the season were gathered.

I’m back now to the tattie holidays and the school’s open day.

Patricia Thomson and support teacher Sheila Grieve were there to help and talk about the school’s activities and so on.

The four pupils, Heather and Gavin Woodbridge, Duncan and Cameron Gray, had been involved in many studies over a period of two terms that had taken them here and there in Orkney.

They also had a look at early prehistoric settlements when they went to see the Broch of Gurness, Evie, and the Broch of Burrowston in Shapinsay.

The pupils had mostly prepared and set up their own wall displays and were ready to talk about their work as the visitors walked around. Heather was dressed as a Victorian lady whilst the boys were dressed as knights.

Costumes had been designed and expertly made by classroom assistant, Edith Craigie.

In addition to their school project work, the pupils had also experienced activities such as archery, canoeing, map-reading etc at the Birsay outdoor centre.

After presentations of swimming and good conduct certificates, tea and homebakes were served, to end a most enjoyable afternoon.

When some of us older folks were partaking of all sorts of homebakes and other tit-bits that afternoon, we reminisced about earlier school days.

We tried to work out where the movable partition that divided the present new classroom into the ‘peedie end’ and the ‘muckle end’ used to be — peedie for the younger scholars and muckle for the older — but couldn’t quite.

We remembered the two old coal fires that didn’t heat up the rooms particularly well during winters which were much colder than we experience today.

As for visits to the Orkney Mainland, that never happened, apart from the one yearly island trip-day to Kirkwall, during the summer holidays. Sometimes we had picnics at our own broch at Burrian, but that was more or less the extent of our archaeological excursions. What I will say though is, that it’s a big step from the old-fashioned slate and slate pencils (that I just remember using occasionally) to the computer technology of today’s comfortably-heated classroom.

Mary Leonard has recently written a fine account of our harvest home in Orkney Today but I will add a little extra just to complete the picture.

On October 29, a night which, in the old days, would have been considered very appropriate as the moon was full, the old Memorial Hall was brought to life once more.

About 80 folk, including many friends and relations coming from the Orkney Mainland, three from London and one from the USA, sat down to a royal feast of native mutton, roast beef, gammon, clapshot and cider. Cheesecake with cream was the second course, with tea and homebakes to follow.

Before the supper, the association’s president, Peter Donnelly, made the welcoming speech in which he talked a little about island life and told a funny story or two. 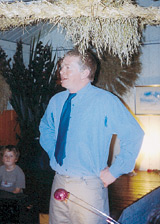 The association’s guests this year were: Andy Cant, our speaker, and his wife, Alice; Marlene Thomson, manageress, Birsay Farmers, her husband Gordon; Neil Foubister, manager, Frozen Food, his wife Susan; members of the group Hullion, Ingirid Jolly (Billy was unable to come), Owen Tierney, Micky Austin, and his wife Liz — Andy is of course the other member of the group.

The North Ronaldsay Heritage Trust, one of whose main duties is to look after the Memorial Hall, also had guests this year for the first time.

They were Mike Pascoe, his son Daniel, and his wife Shelagh. Mention was made of Mike Pascoe’s sterling efforts in the heritage trust’s fundraising activities for new windows for the old hall.

Mike and some of his diving colleagues, who, in the mid-70s, had dived on the wreck of an old East Indiaman lost in 1740, gave very generously as they remembered lightsome days when they had billeted in the old hall. Five new windows are now installed — two to go.

Incidentally, the old hall has been recognised as a war memorial by Friends of War Memorials, an organisation based in London.

Patricia Thomson followed those acknowledgements by saying the grace, and after supper, Andy Cant rose to make his speech.

He opened with the dramatic statement: “The World has gone Mad.”

He went on to enumerate examples of this madness from Iraq to the unbelievable (I think) passport system required for farm animals along with all the other ever increasingly restrictive farming controls now being administered across the board.

But North Ronaldsay residents were not let off entirely scot-free when he managed a few apt references. He also told a number of amusing stories connected with his veterinary activities. 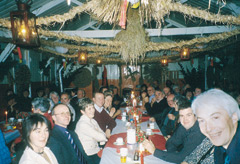 Peter Donnelly (right) and other guests - including three from London and one from the USA at the Harvest Home.

One related how, in one of the North Isles, where often in the isles a car is hired for visits and when occasionally there are problems with temperamental vehicles, he faced a minor problem.

On this occasion, the car was pre-booked but, on arrival at the airstrip, his contact was nowhere to be seen. Undaunted, Andy picked a likely looking car parked at the airstrip that performed beautifully all day.

Some time later, (having never received an account) he discovered from his island contact that he had in fact quite forgotten to arrange for any car. Andy never heard whether the owner had been any the wiser.

After closing remarks to an entertaining speech, the speaker, glass in hand, asked everyone to be upstanding and to toast the harvest home.

Once the tables etc had been cleared, the dance got under way with the local band and Hullion providing the music.

During a break, Ingirid Jolly sang a Shetland song about fishing, with the title of Rowan Foula Doon, and John Cutt recited a poem written by his late uncle, William Swanney, Viggie, commemorating the exploits of Captain E. E. Fresson, OBE. The poem was entitled, Exploits of Captain Fresson to North Ronaldsay.

As John explained, 70 years ago, on May 29, 1934, Britain’s first domestic air service was inaugurated when Captain Fresson flew to North Ronaldsay with passengers — the war years put an end to that service in the islands.

Then there was a very lively Eightsome Reel with Sinclair playing the pipes. Five sets swung round the bouncing dance floor with many a ‘Heuch’. On went the music and dance until a break for tea — more mutton, sandwiches and homebakes made the rounds.

Ian Deyell and Peter Donnelly organised the raffle when many great prizes were won — a food hamper, binoculars, an original watercolour, bottles of whisky, wine and brandy and numerous other items.

The raffle, arranged for the benefit of the Memorial Hall, raised a magnificent sum of £362.

More dancing followed until about three in the morning when the last dance was announced. After the singing of Auld Lang Syne, and for another hour or so, folk enjoyed cups of hot soup, more mutton and anything else they fancied.

And so the 15th harvest home to be held in the Memorial Hall since our return to the traditional venue came to a close.

As I turned the key in the lock, I wondered if the ghosts of the old hall of 84 years gone, came back once more to relive the great days of North Ronaldsay and to dance another reel to the music of fiddles and melodeons.

Well, folks, I’m at the end of my letter and I’ve been looking for a suitable poem or some lines to close with.

After much searching, I found a verse which suits in many ways. I found it in The Orkney Book published in the early 1900s. The poem was called Orkney and the author was John Malcolm.

Oh! At such soul-inspiring strain
The wondrous links of memory’s chain,
Though scattered far, unite again,
And Time and Distance strive in vain.
Again Youth’s fairy visions pass
In morning glow oe’r Memory’s glass,
At every magic melting fall
They come like echoes to their call,
And with the dreams of vanished years
Steal forth again our smiles and tears.