Suppose, for a moment, that you were asked to propose the Immortal Memory. And suppose that you agreed to carry out the request jointly (you and your partner), and just think that the audience had been able to listen in on your developing ideas.

Well, that is exactly how the North Ronaldsay Community Association’s guest speakers, John and Naismi Flett from Kirkwall, presented this year’s Immortal Memory.

There they were sitting at a table (as if at home) discussing ways about how best to put together their speech; wondering what the North Ronaldsay folk would make of it all. From time to time, to emphasise a point or illustrate the humanity or the satirical and perceptive genius of the bard, they would recite a special poem or quote a verse or two: Holy Willie’s Prayer, John Anderson, Mary Morrison, The Twa Herds, My Spouse Nancy and so on.

I can tell you now that John and Naismi, as you might expect, gave the most wonderful tribute to Burns – one which, I’m sure, will be long remembered.

Upwards of 70 folk attended the Burns Supper held on Saturday, January 19, in the new community centre.

A number of visitors from outside the island were present this year as it happened, including the newly appointed development officer for North Ronaldsay and Sanday, Rose Seagrief.

A number of North Ronaldsay folk also came out for the event. This meant moving from a smaller venue into the main hall. The night before the event a few of us rolled up our sleeves, got down to work, and decorated the large hall.

Up went three nine feet or so wide curtains of red, blue, and green, covering the stark white walls and reducing the hall in size by a quarter or so. On to the draped curtains we hung tartan rugs, lengths of tartan material, hessian and scrim with neep baskets and various assorted riddles – all implements such as Burns would have used.

Across a false ceiling, which we brought down to about the curtain height by stretching fine netting across the hall, we scattered many red roses made from crepe paper. All of that in candle and lamplight created an atmosphere very suitable and cosy for the night’s proceedings.

To begin the evening, Peter Donnelly, North Ronaldsay Community Association president, welcomed everybody. He acknowledged the efforts of many willing helpers (without whose work no successful event could ever happen) and introduced the association’s guests. Two speakers have already been mentioned but there were other quests: Innes Wylie (pipes) and Grace Wylie, of Dearness, Howie Firth, Fiona Driver (fiddle) and her partner Keith Rendall, of Rendall.

This year, two pipers wearing kilts piped in the haggis – Innes Wylie and our local piper Sinclair Scott (both members of the Stromness British Legion Pipe Band). They made a couple of rounds of the hall for good measure. Between the two marched the chief cook, Winnie Scott.

Howie addressed the haggis with much verve, to be followed by the Selkirk grace recited by John Cutt. The pipers then marched out playing Highland Laddie.

Cider accompanied the supper, with ample drams being served later in readiness for the main toast of the evening.

We then enjoyed John and Naismi’s Immortal Memory, which, as I explained, was so wonderfully and so very grandly performed. They had extra lights for their readings but otherwise they sat or stood up in candle and lamplight with Burns’ portrait looking on in the background.

After the Immortal Memory, Sidney Ogilivie proposed the Toast to the Lasses and his wife Anne replied. They performed this part of the programme very nicely indeed with both their speeches delivered in rhyme, basing their discourse on For a’ that and a’ that (with apologies to Burns).

Howie Firth, who last year recited Tam o’ Shanter, followed with a short tribute to Burns and a near contemporary, Slovenian poet, France Preseren. (In Slovenia, on January 25, there had been a celebration of the two poets’ lives.)

Howie began by reminding us of the tsunami disaster and of the Holocaust, this year being the 60th anniversary of the liberation of Auschwitz. He went on to talk about the similarities of the two poets, quoting some verses to illustrate, in particular, the two men’s belief in the brotherhood of man.

Sidney, by special request, then sang Kellyburn Braes, a 14-verse poem by Burns (slightly changed by Sidney to suit the tune). It is always enjoyable to listen to the song.

This was followed by the fiddler, Fiona Driver, who has been a guest performer at a previous Burns Supper. Once again we listened to her fine fiddle playing. She began with two slow airs by Neil Gow, followed by strathspeys and reels by Gow and others of the period. How very fitting it is to listen to music such as Burns would have known and in the same lighting as would have been used in those days of over 200 years ago.

John Cutt continued by reciting, in his inimitable style and in the North Ronaldsay dialect, a short story, Things we said in Aalden Days, written by Allan Taylor (Kirkwall).

Slight adjustments had been made to suit the local situation as the reader explained. The reading caused much amusement and I’ve no doubt that Burns would have thoroughly approved of the keeping alive of the local dialect.

To conclude the programme, Howie proposed a toast to North Ronaldsay. At the first official Burns Supper held in the island in 1933 such a toast was made. It seems appropriate to continue with this tradition and Howie, as he did last year, delivered a short speech full of interest when he talked about several people from the past: Sir Walter Scott, the lighthouse-builder, Robert Stevenson, Rev George Low, Colonel Thomas Traill and Earl Rognvald of Orkney.

Howie imagined that they would have readily raised a glass to join in with the toast to North Ronaldsay.

Soon the dance got under way. Sometimes folk were in a “discoorsie” mood, other times in a dancing mode.

Innes Wylie played accordion, as did Ann Tulloch. From time to time Fiona Driver accompanied on fiddle, as did Jim Sinclair (Shapinsay) on guitar, Kathleen Scott and Victor Reid (Kirkwall) tapped out the rhythm and I tinkled a key or two in between times.

Sinclair played a fast eightsome reel which had us in a whirl. Great was the mood of the night.

During the tea break, with homebakes, currant bun and Westray shortbread being served, the raffle in aid of the tsunami disaster was drawn, with Ian Deyell and Peter Donnelly officiating. Many were the generous prizes donated and very magnificent was the amount raised (including donations) – £510.70. The door takings were also added to the fundraising efforts, making a total of £893.20. That sum, plus other monies from the community council gave, a grand total of £1,493.20 for the appeal. Collection boxes from around the island have yet to be opened.

Fiona Driver played a selection of toe-tapping tunes in her seemingly effortless style (accompanied by Jim Sinclair on guitar) before the last two dances were announced.

By around three in the morning the singing of Auld Lang Syne brought our celebrations for Scotland’s national poet to a close.

It also brought to a close what is now our tenth celebration of Burns (after a lapse of some years). It was, in fact, the former director of education, Jim Anderson, who provided the inspiration for this revival. He had been our Harvest Home speaker in 1995 and reminded us that 1996 was the 200th anniversary of the poet’s death and so he became our first speaker in our revival of the commemoration – a revival which has brought much enjoyment.

Last night, the stars were brilliantly clear, with Orion for a time dominating the eastern sky. Earlier, the sunset, mostly hidden behind black, purple clouds, left a line of orange close to the horizon. And above the dark clouds, in between the main canopy which extended in all directions, the background sky was a beautiful pale, luminous green. All day the West Sea was thundering away. 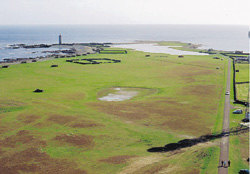 Tonight, February 3, at the mirking, I heard a blackbird trying out a few notes. Is this a good or bad sign so early in the year, I wonder? Either way it’s grand to hear the blackbird begin to sing once again.

The oystercatchers are also calling.

But what about Candlemas day, February 2?

“If Candlemas day dawns bright and fair, half the winter’s to come or mair” – is that how the rhyme goes?

Well, it was a fair morning followed by a misty “weet,” so maybe a quarter of the winter is still to come.

In Holland House’s gardens, and in other shelters here and there, the snowdrops are hanging their little heads. They are the first sign of the coming spring and, if one takes a look under their peedie petals, delicate colours of green and orange surprise and please the eye.

One month is past, another is begun,
Since merry bells rung out the dying year,
And buds of rarest green began to peer,
As if impatient for a warmer sun;
And though the distant hills are bleak and dun,
The virgin snowdrop like a lambent fire,
Pierces the cold earth with its green-streaked spire
And in dark woods, the wandering little one
May find a primrose.