Tonight is the night of the full moon but she has been hiding in a cloudy sky for most of the evening.

A couple of nights ago she looked absolutely beautiful. Occasionally dark clouds might sail past, momentarily hiding her face and sometimes rainbow colours would appear nearby just before she came into view again, but later the sky became a sort of misty grey in which the moon swam ever fainter.

I happened to be out in the night for a spell. From time to time a solitary teewup would give a lonely cry as it flew away, invisible in the night.

A few days ago it was mid-hairst day – 15th September.

The old saying was “Cut green or grey on mid-hairst day.” In other words, even though crop might not be ripe it was the time of year to shear.

Well, I was remembering the old adage and also that we are now in the phase of the harvest moon.

I have to say that in the moonlight the other night and hearing the cry of the solitary teewup I felt rather sad, in as much as this year there is no hairst work to do – no clickety-clack of the old binder, no sheaves, stooks or stacks, nobody to come along and remind the island of past hairsts.

I’m glad that two seasons ago (2003), knowing that, as I said at the time, the writing was on the wall, I set about composing a particular Letter from North Ronaldsay. In that letter I described the process of bringing out the binder, cutting the crop, stooking and leading with two or three peedie stacks being built.

I imagine that had I sown oats this year, the shearing would not have been much fun considering the great amount of rain that has fallen lately.

So at least I/we have been spared some unpleasant work.

But then one had to put up with such difficulties especially when, not so very long ago, so much of the island was cultivated and sown to the old-fashioned Orkney bere and oats. I say not so long ago but really we are talking of 40 years or more ago.

What is missing is the lightsomeness of it all – because along with the bad days there were the good days. And, as I have often described before, there were the days when one helped others to complete the harvest work. It was a type of enjoyment that I do not think we will ever experience or share again in quite the same way. Only for a few will those memories remain of a way of life, it seems, now gone.

Well, this has been a disappointing summer in terms of weather, but otherwise we have had a very busy and varied social life.

Then the opening of the North Ronaldsay Archive exhibition with another dance to follow when 14 folk celebrated special birthdays. A wreath was placed at the War Memorial on that occasion.

This was followed by another entertaining week-end with a concert and dance and the first open North Ronaldsay six-mile road run and, because of the inclement weather, an indoor barbecue (operated in a lee doorway).

A sale of work in aid of the North Ronaldsay Trust also took place. I was spared having to write up accounts of the first and last (written by others) but managed the second event.

Of the three dances – one in the New Centre with the other two in the Memorial Hall – the last was a really great night and as good a dance as we’ve had for some time. I suppose upwards of 90 folk participated with a great proportion being in the younger age group. All were very enthusiastic – visitors, islanders, relatives on holiday, and returning islanders alike.

Everybody simply got up and jigged away the night long.

Now that makes for a really good dance. The band: Three in a Bar – Fran Gray, Lesley MacLeod and Hamish Bayne, were in great form – and Hamish in fine voice as he sang a song or two. No amplification required just swinging music in an old hall full of atmosphere, decorated with balloons, bunting and evergreens; good acoustics and a grand dance floor and a chance for older folk to discoorse and enjoy themselves.

What else can I tell you? I think I will have a look outside and see how the old hairst moon is faring – what’s more it’s well past the “heuld” (never mind, I painted a few windows during the day). The sky is overcast but there is, along the southern horizon, a curious luminous light which at least tells me that the moon is certainly still to the fore.

Recently, at the New Centre, we enjoyed an Orkney Science Festival evening, when Anne Sinclair from the Fair Isle gave an illustrated talk about her native isle. She spoke about shipwrecks, island life and the famous Fair Isle knitting.

As well as Anne’s contribution, a Slovenian speaker, Katarina Juvancic, gave a talk about traditional music and its importance to a people’s culture. As her theme she took Slovenian and Scottish/Orkney folk songs. She both played recordings of, and sang, a number of traditional songs.

After a lengthy question and answer session the two speakers performed together a song from Foula. There was an excellent attendance and to end the evening tea and biscuits were served.

On another fine day a group of us tarred the Memorial Hall in addition to doing a few repairs. That was fun, and more fun was had with a dram or two or three when the workers enjoyed a well earned spread of sandwiches, cake etc.

John o’ Westness was in fine form with some particularly amusing stories from the old days.

Finally, a small group of folk from the Orkney Archaeological Trust came out for a few days to investigate an area next to the Broch of Burrian (excavated by Dr W. Traill in 1870/71).

Owing to part of the surrounding sheep dyke having been severely damaged by winter storms, sheep had gained unhindered access to the monument. Their damaging activities had exposed a few artefacts in an area (it was thought) of discarded material from the original excavations. 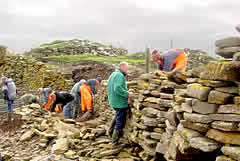 June Morris took this photograph of the dyke builders at work below Burrian broch.

After careful research a number of additional items emerged: some bone needles; bones of various animals (yet to be identified); a painted stone with Pictish symbols; part of a whalebone; and part of a bone comb.

In addition, the area east of the broch was found to be far more extensive than first thought. This was discovered with the use of a magnetometer which identifies minute quantities of magnetic material – such as burnt residues, which in turn indicates human activity and, therefore, probably more settlements

The main part of the damaged dyke was rebuilt later with a few islanders helped by a number of visitors from the bird observatory including the team from the archaeological trust.

Drs Gerald and June Morris, Howar, owners of the ground on which the broch is situated, kindly served drams and sustaining chocolates to the dyke-builders.

What would the old men have thought? I’m very sure they would not have said no to the fine whisky. The broch is once more protected (at least until the next storm to hit that area) and should recover its protective covering of natural grass in time.

Before the research team left, a well-attended gathering at the bird observatory enjoyed a short talk on the monument’s history and an account of the work carried out. This talk was given by the team leader, Paul Sharman. Photographs were shown and items found were on display.

It was nice to meet up with my school classmate Dr Marion Chesters (nee Tulloch, Kirbest) after the great birthday celebrations (mentioned earlier) and her husband John who is also a doctor. Both are interested in Orkney’s archaeology and were out from the Mainland to help with the work.

I’m finishing this letter on one of those silvery grey mornings with the sunlight filtering through a scattered canopy of high cloud. Pale blue and greenish patches of sky add a bit of colour here and there. The wind is southerly and the day is mild though I think that change is on the way.

Contrary to my idea that the teewup, or lapwing, is a solitary bird at this time of year, I counted 30 or so wapping this way and that, calling to one another as they flew – maybe this was just a back-end get-together!

Flame-coloured montbretia adds a bit of colour to my very limited front garden and a peedie wren has just flown over the dyke. Starlings are chuckling on the chimney enjoying this peaceful morning, and a few of my kye are having a rest as they chew the cud.

Well, I have some more windows and doors to tackle so I shall have a cuppa, as Mary o’ Burray used to say, before I begin.

I hope maybe tonight the old hairst moon will be up in the eastern sky – sad memories though she will bring me. I think she too will be a little disappointed not to see an old-fashioned oats stack or two (actually there is one stack – a loose hay stack made, and build in the traditional way at my late father’s old home not far away) but there we are.

Oh, I’ve just heard the honking of geese and I have counted some 80 or more flying south in an ever-changing vee formation, and the sun has just come out with a freshening wind which is making the montbretia take to a spot of dancing.