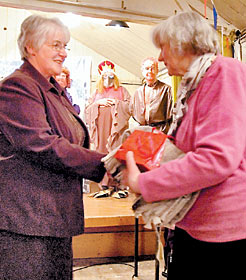 Christine Allan (left) receives gifts presented by Helen Swanney, on behalf of all on North Ronaldsay to thank her for her service of more than 30 years with Loganair. (Picture: Dawid Grudzinsky)

Already it is April — the name of the month that Edith Holden says is derived from the Greek word for ‘opening’.

And here is one motto she mentions: “April weather, rain and sunshine both together.”

I’m beginning the rough draft for this letter sitting in the old Memorial Hall where a few of us have just finished tidying up after last night’s entertainment.

It’s raining outside but we are very comfortable here with our old-fashioned gas heaters keeping everyone warm. A peedie dram or two on such a dreary day and some lightsome discourse is just the thing to finish off this Easter break, I think.

As you can imagine, apart from a few notes, I didn’t get very far with my draft. But we managed a strip the willow and a one-step before closing up the old hall.

Now, a day or two later, I’m getting down to the business in hand. It’s a very fine morning with the skylarks singing and a blackbird is whistling not far away. 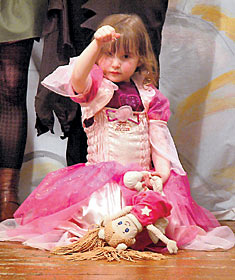 It’s a dry day, with tumbling silvery-grey clouds that stretch from east to west and north to south, and the sides of the roads, here and there, are ablaze with daffodils.

No sign of the sun so far, yet the day is particularly mild and the light south-westerly wind carries the sound of breaking seas from the windward side of the island.

Anyway, to get back to our Easter event. Sidney Oglivie had written a little sketch, or a play, or was it a short concert? Or dare I say it was a pantomime?

Everything has to be declared these days and described in minute detail. The time will no doubt come when everybody will have to fill in a risk assessment form before we will be allowed even to step outside our own door!

Suffice it to say that Sid had created something that everybody enjoyed — particularly the young folk of whom there were 17 present.

Eleven had actually come from the Orkney Mainland with friends and relatives for the occasion — if only they were all living here!

Also coming from the Mainland was the Linklater band — Dave, on accordion, his mother, Elsie, on keyboard, and his father, Dave, on drums.

Then there was Pat and Christine Allan. The North Ronaldsay Community Association had, after at least two previous attempts, managed to get Christine Allan (retired from Loganair 2006) and her husband Pat out to a function.

Alison Woodbridge, vice-president of the community association, welcomed the guests and

the company of well over 70 before getting the evening’s performance under way.

Sid had called his production Jock and the Beanstalk — or perhaps more appropriately — The Little Giant and the Birdie Folk. 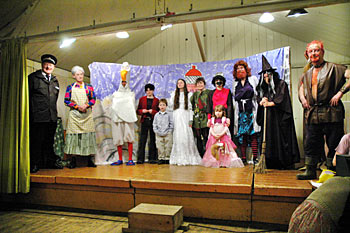 The cast of the North Ronaldsay show line up on stage during their Easter performance. (Picture: Dawid Grudzinsky)

It was great to see a few of the younger generation taking part: Heather Woodbridge, Anna Scott, Ronan and Lilly Gray.

Attending to the background music (The Hansel and Gretel Overture by Engelbert Humperdinck) was Edith Craigie.

The exotic and often amusing costumes had been made by the cast as had the scenery. Three scene changes added to the drama: Outside Jock’s Cottage; Cloud Cuckoo Land with the Castle in the distance; and Inside the Giant’s castle.

So began the evening’s entertainment. As you can imagine from the characters, all sorts of things happen: the giant that turned out to be a little giant, but who nevertheless liked to eat the Birdie Folk and bairns; the witch who paid for Jock’s cow with the magic beans; the goose that laid golden eggs; the King and Queen of the Birdie Folk; the Cloud Cuckoo Land Police Department; Jock, who sets out to vanquish the giant and who sings When you wish upon a Star and Somewhere over the Rainbow; the Giant’s song, a version of Count your Blessings; the giant’s defeat, capture and punishment.

And thus we arrived at the happy ending with Anne Oglivie, the storyteller, summing up and giving a moral to the story: “And so the years passed and Jock and Gretal married and went to live on Cloud Nine. And though the little giant (sorry, big dwarf) sometimes missed his Sunday roasts, he realised he was much happier being friends with his neighbours. In fact he discovered one of the most important lessons in life. Every cloud has a silver lining, but you must look for it if you want to find it”.

All the cast then sang Look for the Silver Lining.

After resounding applause, everyone was asked again to show appreciation for such grand entertainment and for providing this opportunity for an Easter celebration.

Next was a tribute and presentation to Christine Allan. In 1974 Christine had embarked on a career with Loganair that lasted 32 years.

Those were the early days when Loganair was a large and very busy organisation. Flotta and the oil business were at their height, with Loganair often arranging transit for oil-rig crews flying by helicopter when required.

Air charter work featured prominently, and not only was there the North Isles air service but Flotta — at that time a very busy oil-terminal — and Hoy also received a passenger service.

North Ronaldsay was to receive extra passenger flights including a once weekly air-freight service of perishable goods.

In those early days too, Loganair was in competition with British Airways, with Loganair staff arranging bookings etc, to Wick, Inverness, Glasgow and Edinburgh.

There was also, of course, the efficient ambulance service to the islands that after many years of reliable work was recently, unjustifiably, terminated and replaced with a questionable alternative.

Then there was the franchise period, with Loganair becoming independent again in 1997.

Through all those years, Christine gathered much experience behind the desk becoming for some years senior customer services officer in charge of the office.

More responsibility fell on her shoulders with the early death of Bob Tullock in 1998, when her years of experience proved invaluable. Christine’s consideration and help, especially in connection with North Ronaldsay, will always be remembered.

As a token of the island’s appreciation and thanks, Helen Swanney, manager of Loganair’s service’s on the island, was invited, on behalf of the community association and the local community, to present Christine with a North Ronaldsay woollen rug and a piece of Ola Gorie jewellery.

This she carried out most graciously. And to complete a very pleasant occasion, the youngest member of the community, Lilly Gray, presented Christine with a bouquet of flowers.

Christine, much moved by the occasion, accepted the gifts and thanked the community for their generosity to Pat and herself over the years. She said how she missed dealing with us all on the island but had taken early retirement to be with her husband.

She went on to thank everybody for the beautiful gifts given to her on this evening.

After the chairs had been cleared away and the usual dusting of slipperine applied to the much-used old dance floor, a short dance began with the Linklater family taking the stage and providing the music.

Later, Sinclair Scott, on the bagpipes, got folk swirling in a lively eightsome reel. And so the evening progressed until it was time for refreshments.

Tea was served with a splendid assortment of sandwiches and homebakes. This welcome break gave the opportunity for the raffle to be drawn.

Ian Deyell, in great form, worked his way through a very large assortment of prizes, the execution of which was almost all-together another sketch. The raffle brought in a very generous sum of over £150 that the community association and the cast of the production kindly gifted towards the Memorial Hall’s funds.

A few more dances were managed before Auld Lang Syne brought the evening’s celebrations to a close.

Well, I must also bring this Easter letter to a close. I thought it would be nice to remember the words of the song with its good advice that the cast had sung at the end of their performance: Look for the Silver Lining.