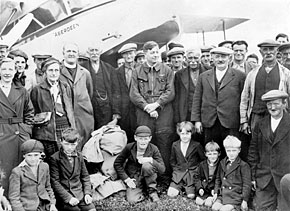 Hello, it’s me again with another letter from North Ronaldsay.

Since I last wrote, the island folk festival took place and it has been comprehensively covered by others in both The Orcadian and Orkney Today.

When I was attending one of the events I was thinking if only all those folk present — well over 100 — were actually living on the island all our problems would be much easier to solve.

Furthermore, we would have music and dancing from day-to-day and everybody would be tripping the light fantastic!

As part of the decorations in the community centre over the festival period, we had on display, a small exhibition of some 20 photographs, enlarged to 12 inches by 16 inches and mounted.

The theme was air travel and the first delivery of letters by airmail on July 31, in 1939, to North Ronaldsay.

Many photographs were taken that day showing the pioneering Captain Ted Fresson OBE at the local airstrip along with islanders of all ages.

I’m including one of these photographs. It comes from a fascinating collection including articles, letters etc researched and put together for the island’s archives by Beatrice Thomson, Finstown (formerly of Neven, North Ronaldsay).

It’s rather amazing to think that the North Isles had a passenger service by air in 1934.

In The Orcadian, dated July 26 of that year, in the intimations column, Highland Airways Ltd, announces an experimental Inter-Island Air Service, as from August 6 to operate until further notice.

Flights from Kirkwall to Stronsay, Sanday, Westray and North Ronaldsay operated twice a week, on a Monday and Saturday, enabling islanders to get in to Kirkwall and back the same day with alternations in days to suit the conditions.

Flight times for North Ronaldsay were: Depart Kirkwall 8.30am, arrive N.R. 8.50am and depart for Kirkwall 8.55am. Arrival time in Kirkwall was 9.20am, having also collected passengers from Stronsay.

The airmail service did not last a month as the outbreak of the Second World War, on September 3, put an end to both the passenger service and the airmail.

Almost 28 years were to pass before Loganair resumed the passenger service and another four before the airmail contract was agreed.

In my last letter, written around the longest day, I was saying that as the days were on the turn, better weather might be round the corner.

Well, the weather has been very much kinder, with some fine days, and even with the persistence of foggy conditions lately, temperatures have been unusually high — in the 70s fahrenheit, John Cutt tells me.

Indeed it has been very warm — possibly too warm at times for much excessive physical labour.

At least we are not suffering the heat-wave experienced further south, on the continent, and in parts of the USA (and I’m sure elsewhere) where I think temperatures of over 125 fahrenheit were being experienced.

It seems terrible to think that thousands of people — the elderly and ill — can actually die from the heat.

Yesterday, I went on a little visiting spree, the day being so pleasantly warm with hardly a breath of wind.

Actually, part of my visit was to check on one or two names in the photograph included with this letter.

But then, apart from a ‘cuppa’ and some very good Christmas cake and shortbread, I enjoyed a tour of my host’s garden.

Through the different dyked enclosures we wandered, in and out of the trees, some displaying roses, honeysuckle and the purple scented flower of, what I call, the evergreen.

How very grand it is on a warm calm day to feast one’s eyes and senses on such displays — particularly the flowers with varying colours that bring pleasure at every turning.

As I write, well past the ‘heuld’, an unusual moth has just appeared fluttering this way and that.

I’ve never seen a white moth this size (about an inch or more wing span), with delicately orange-brown-patterned wings, indoors before.

I managed to catch the creature in a glass and I must have a look in my insect book and try to identify it.

In fact, the other day I saw outside a similar type of moth but larger with orange-coloured wing patterns The nearest, from memory, I thought the insect to be was a carpet moth — but then there are so many that look alike in my reference book.

Another far less pleasant insect that seems to be more common for my liking this summer (it must be the warm weather) is the biting cleg fly.

I have been attacked (by stealth, because that is how they operate) a number of times,

One only becomes aware of this menacing, ugly, grey-coloured fly when the typical needle prick attack is felt — sometimes even through one’s shirt or trousers.

It has the impudence to comfortably fold back its wings (well, that is what it does) intending to settle down for its vampirish meal. Each one who attacks me dies swiftly with as fast a hand movement as I can manage, but it leaves its poison to itch for days. Some folk, I may say, react very badly to the creature’s bite.

This will never do as I see it is coming on for two in the morning. I must away to bed and read at least another chapter of my latest book, Travels in Africa by Mungo Park — so much do I look forward to this fascinating account that even at this late hour I must read a bit more. I’ll finish my letter tomorrow.

Here I am again — not such a good day so far, grey skies and a breeze of wind but still warm, and on the lee side of the ‘hoose’ where the fuchsia and honeysuckle grow in great profusion (no I don’t have a beautiful garden) bluebottles and hover flies are buzzing away, and I’ve just seen a magnificent red admiral butterfly.

Thinking for a moment about Mungo Park when he was exploring West Africa in 1795 — in areas now known as Senegambia, the French Sudan, Niger Colony, Dahomey and northern Nigeria — he experienced real hardship, disease and danger. At one time he was imprisoned by a native chieftain, escaping with only his horse and a compass.

But I must tell you about an episode that took place during the explorer’s return journey from his first explorative venture (he made two).

It caught my imagination and reminded me of the story of Robert the Bruce when hiding in a cave and of how, when his spirits were at a very low ebb, he was inspired to fight on when he saw the determination of the spider.

On Park’s return journey, he was captured by robbers, stripped naked, with his horse, belongings and compass taken.

He was finally left, with minimal clothing in (as he says) “a vast wilderness in the depth of the rainy season, naked and alone; surrounded by savage animals and men still more savage and five hundred miles from the nearest European settlement”.

At this point his spirits began to fail and he resigned himself to certain death.

In this state of total despair he saw a small moss, not larger than the top of one of his fingers. It was, he says, of the most extraordinary beauty that he could not fail but admire this creation in such an obscure part of the world.

He mentions this, at the time, trifling circumstance, and how the mind will sometimes derive consolation when in a state of absolute dispair. He thought if that Being (meaning God) can create such a thing of beauty in such a place, surely he could not look without concern upon his own devastating circumstances. Disregarding both hunger and fatigue he started up and travelled forward assured that relief was at hand.

Well, Mungo Park survived, but on his second journey (1805-1806) to Africa to further explore the Niger he was drowned in this river during a clash with hostile natives. He was only 35.

As I’ve been writing, the day has improved, and now the sun is high in a hazy sky, though a fair wind is blowing from the southeast and I think change is in the air.

Oh, by the way, the moth I caught was, I’m sure, a magpie moth. Anyway, I don’t think I should write much more except to maybe mention one other inspiring tale.

Among former art school students of my acquaintance, there is one colleague in England who receives kidney dialysis three times a week.

She has one day clear between treatments with Saturday and Sunday also clear.

After each session (which takes three hours) the following day, when she is at home, she feels nauseous, tired and unwell. Almost the only day that brings some feeling of normality is a Sunday.

Yet, when I speak with her, she is so very cheerful and full of apologies for her condition and letting us (former colleagues) down by being unable to keep up her side of the work we all trained for.

But she is determined, with something of the same iron-will shown by those two great men mentioned above, to fly up to Aberdeen to meet once more for a re-union with those of us who are left, and who, 45 years ago, worked together and had much fun learning our trade.

Let us think for a moment about Robert the Bruce and Mungo Park and the former art school colleague.

When the struggle appears to be lost and when individuals are faced with seemingly insurmountable odds or suffer ill-health, it seems there is something in the human spirit that transcends all of this and gives us hope and courage to face another day.