Well over 100 years ago, the camera recorded a surprising amount of what took place, and, of course, the camera captured images of people who lived all those years ago.

Then there is the written material – letters, records, documents, books etc, all of which give an understanding of how people lived and worked; how they thought, and how their lives influenced the times in which they lived, and vice versa.

The ongoing collection of that material, and the later recording technology and its availability creates an archive – a place for us and others to learn about our past.

Today, in North Ronaldsay, for example, there are a few folk around who are – so to speak – living archives; folk who remember events and characters or stories told, as long ago as before the turn of the 20th century and of more recent times.

From day-to-day one hears such tales. From them we learn about the island’s history. Sometimes the accounts are amusing but they are also informative.

Those who remember and relate this information are only here for a short time. When they pass on, only a little will be remembered by the next generation.

That will be so, and especially today since technology, both in farming, day-to-day living, and in the world of modern media development, all contribute to the loss of the oral tradition. That is why some record of our history should be preserved for future generations.

One of a number of Millennium ideas submitted by the island was the North Ronaldsay Archive Project.

This project was successful, and on Saturday, July 23, an exhibition in the New Church showing what the archive project means – its aims and progress to date – was officially opened.

Kathleen Scott, archive project co-ordinator, welcomed a company of between 60 and 70 gathered in the New Church, where the exhibition had been mounted.

The work displayed – photographs, maps and information albums – stretched through the main of the church, into the entrance hall and session house.

Kathleen explained briefly how the archive project – a project under the auspices of the North Ronaldsay Heritage Trust – had come about. 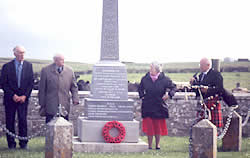 Laying a wreath at the war memorial, from the left, are: John Cutt, John Tulloch, Eileen Eton and Sinclair Scott. (Picture: Fraser Dixon)

She explained how the archives would eventually contain a wide range of information including archaeology, prehistory, education, religion, lighthouses, shipwrecks, culture, language and natural history, and that key elements would be digitised.

She went on to say that many people, too numerous to mention here, both at home and abroad, are currently involved in the archive project.

Special mention was also made of help from the Orkney Museum and Grainshore Training Centre who fabricated the professional display stands for the exhibitiion.

Funding for the Archive Project had been provided by the OIC development fund, the Esmee Fairbairn Charitable Trust, the Robertson Trust, Orkney Enterprise and SCRAN-RLS.

Cameron Taylor, of Orkney-based consultants, Seabridge, prepared all the applications for funding and Northstar New Media, in Stromness, digitised all the material sent to SCRAN.

After this introduction, Kathleen invited Councillor Sinclair Scott to speak.

He began by saying: “Basically, the Millennium project was the brainchild of a number of people, one of whom was Howie Firth.

“The project was a great idea . . . it has benefited Orkney in all sorts of ways in different places.

“North Ronaldsay has been successful with two applications, one being the archive project – a project which would go on for years – and the other the erection of bird hides.

“The council, I hope and believe, is going to have another project with a similar fund to be set up. The announcement, once the councillors have finalised the system, should be made sometime this year.

“Such projects will attract great assets to Orkney from people outside Orkney who give grants and so on.”

Sinclair finished by saying how pleased he was to see so many folk present.

Alison Fraser was invited to speak.

She began by saying: “I’m really impressed with what I’m seeing. I’ve been watching and seeing it through Beatrice Thomson’s work.

“She has been coming to the archives two or three times a week and I’m really impressed with what she has done.

“A lot of material here is held in the archives in Kirkwall and it’s really good to see it in its original context where local people have much easier access.”

Roddie Hibbert’s contribution was also acknowledged as he scrolls through newspapers alerting Beatrice to anything relating to North Ronaldsay.

Alison finished by congratulating everybody who had been involved with the project.

Kathleen then asked Howie Firth to speak and open the archive project officially.

Howie began by describing the origin of the Millennium money when he was a councillor. He spoke of how, initially, £500,000 was the sum mentioned. Howie’s fellow councillor, and great friend, John Brown, proposed £2 million and it was accepted without more ado. This money, he said, has done great things for Orkney.

He continued: “The past is not another country, it is actually another dimension of the country we all live in.”

Last night (having a preview of the exhibition) an hour went by, Howie said, and he was only half way through a folder.

“The past is another dimension of the present, and we can access it very easily, if we try – when it matters to us, we begin to investigate.

“Just as the past is not another country but another dimension of the country we live in, and just as that past becomes alive when we investigate it, in the same way an understanding and knowledge and research into the past is the basis for the future.”

Howie then mentioned how people – especially young people – are rediscovering their own culture.

He mentioned the heart, soul and spirit of a place which he sees in North Ronaldsay.

The exhibition and other events happening in the island were proof of this, and he thought the future for the island was both exciting and positive.

Finally, he said how it was a great honour and privilege to be asked to open the exhibition. After a round applause wine was then served.

Shortly afterwards, people proceeded to the War Memorial to mark the 60th anniversary of the end of the Second World War, where Sinclair Scott, Cruesbreck, played the lament.

John Tulloch, Senness, veteran of the Burma campaign, laid the wreath of poppies and, after the two-minutes silence, John Cutt, Gerbo, recited the familiar verse by Laurence Binyon, beginning with the words, “They shall grow not old, as we that are left grow old…”

Later in the evening, folk arrived at the Memorial Hall for a video presentation called An Orkney Symphony and it proved to be a most enjoyable, well filmed, visual mosaic of the Orkney Islands.

Immediately afterwards, substantial drams were served by a number of folk who had, in this year of 2005, reached milestones in their lives.

Soon a really swinging dance got under way with toe-tapping music being played by Ruby Manson and Tom Newlands, from Stromness.

Taking advantage of the evening were the lively birthday folk who had, in one way or another, reached milestones in their lives, 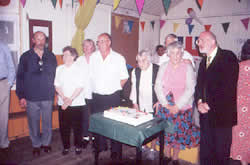 There were four 60-year-olds: Eileen Eaton (nee Tulloch, Scottigar), Kathleen Scott, South Ness, pupils together at the local school in the 50s. Sandra Mawson, Roadside, a relatively recent new islander, was the third 60-year-old, with our familiar Howie Firth making the fourth ‘milestone person’. Howie was up in Orkney on Science Festival business.

Two others – new islanders or not so new since they have been living here for some years now -Sydney and Anne Ogilvie, Cursiter, brought that age group to seven.

Still more birthday folk are to be mentioned, for present also were two of our more senior islanders. They were Mina Swanney, Cott, in her 80th year, and Jenny Tulloch, Scottigar, who will be 85 before the year is out. With over 90 of a company present, a great cake cutting ceremony eventually took place and much fun was had when a beautifully-decorated, iced cake, baked by Evelyn Tait, Kirkwall, was cut by Mina and Jenny with the rest of the birthday folk providing support and encouragement.

On went the dance with Strip the Willow, an Eightsome Reel, Palais Glide, Pride o’ Erin and so on.

A special birthday cog prepared by Jean Tulloch, Kirkwall, (formerly Upper Linnay), made the rounds through the evening, served by first one birthday pair and then another. Traditional fare was also served as the night progressed.

Ian Deyell and Arthur Cowie supervised the raffle which brought in £147 for the North Ronaldsay Heritage Trust – one of whose commitments is the preservation of the Old Memorial Hall.

So went the night, until, between two and three in the morning, and with the singing of Auld Lang Syne, this memorable day’s events came to a close. Association members, who had organised the evening and attended to their usual duties, finally helped to serve hot soup.

Outside the dawn was beginning to light up a cold northerly sky but the gods had indeed smiled favourably on this 23rd day of July, 2005.