Somebody told me the other day that the summer holidays are almost halfspent.

That can’t be possible I thought, but when I considered for a moment and looked up my diary I saw that the school’s end of term open day, which usually heralds the beginning of the school’s summer holidays, actually took place on June 28.

So now I see that as we get older time appears to get shorter. What seems like two weeks is nearer four, and two years becomes four or five or more.

In any case, the school’s open day was as enjoyable as it always is.

An informative selection of work was on view. There was the term’s project work — a study of the Romans; pupil target folders; examples of creative writing — computer and hand-written work, etc. Pupils Duncan Gray, Gavin Woodbridge, Cameron Gray and Ronan Gray (Primary One) had obviously been well motivated. Lilly Gray, nursery section, had also been having a constructive time.

On view were projected video stills and photographic displays showing the three older pupils’ visit to Caithness. They had been to the Wick Heritage Centre, to the Thurso football pitch, to Stroma by speedboat, a re-cycling centre, on a sea-fishing trip and enjoyed quad bike rides.

Ronan and Lilly, on a visit to Kirkwall had seen the hospital, fire station, Kirkwall lifeboat and the Pickaquoy Centre.

Add to all of that swimming and collaborative joint-school work such as in drama productions and art.

In the main community hall an exhibition of quite impressive art work was on view from Papa Westray, Eday, Flotta, Rousay and North Ronaldsay. This collaborative effort between the different islands is a great idea, as are the visits made to the Mainland and further afield.

So, head teacher, Sue Gilbert, had done great things with her pupils. This was acknowledged when, as reported recently, HMIE inspectors applauded the versatile range of work provided and the effective leadership of the head teacher.

Praise was given to all aspects of nursery provision. Commendation must also be attributed to support teacher Anne Ogilvie (Anne took over mid-term from Sheila Grieve, who had taken early retirement) and nursery early-years worker Marion Muir.

Having begun by looking back, I think I will continue my letter as a sort of extended ‘here and there’ dairy.

Readers of The Orcadian and Orkney Today would have seen the very comprehensive coverage (with many photographs) of the North Ronaldsay Folk Festival.

That weekend coincided with the opening of the £4.5m redevelopment of the Pier Arts Centre in Stromness. This was a special occasion with some 400 Friends of the Gallery, funders and exhibiting artists attending the public opening.

My mind had been made up earlier to be in Stromness for this event, so off I flew by Loganair on a day of sunshine and banks of shifting, rolling mists. How very grand it was to be in Stromness again, strolling up or down the “hills and dales” of the friendly old town.

Still to be seen preserved in Stromness, are parts of the original cobbled streets of past times. I had a Stromnessian friend who walked along with me answering my questions about this and that, or pointing out places of interest or of historical importance. Such as, for example, the Lieutenant’s house (built by Lt James Robertson RN, who commanded HMS Beresford at the battle of Plattsburg in 1812); the Lighthouse shore buildings where generations of lightkeepers’ families once lived; the remaining gable-end of a house where long ago a blacksmith worked away on his forge — part of its chimney can still be seen in the gable; the cast iron pier head fountain, where once horses drank.

The fountain bears a plaque commemorating Alexander Graham. It was he who led the fight against an excessive, debilitating trading tax levied on Stromness traders by Kirkwall. Though successful, Graham was forced into bankruptcy as a result of his efforts and died, seemingly, in poverty.

As we made our way down to the harbour who should I meet but a lady from the past. Years ago, she lived for a time in North Ronaldsay where her husband was a lightkeeper. And another acquaintance from more recent times — also with a lighthouse connection — was the son of the last principal (before automation), of the North Ronaldsay Lighthouse, now a successful owner of a taxi business.

But I have strayed a little from the Pier Arts Centre. It has now become a truly magnificent building and a great centre for the Arts. The opening was a splendid affair with further celebrations in the Stromness Hotel.

In Kirkwall, earlier last month, I visited the Orkney Museum and the Kirkwall Town Hall to see the retrospective exhibition of paintings spanning the life and career of Dr Stanley Cursiter RSA RSW (1887 – 1976). I must certainly go back again.

Janette Park, Social History Curator at the Orkney Museum, with much work and dedication, over a period of two years of research and fund raising, had organised this tribute to Stanley Cursiter. Janette is an ardent admirer of Cursiter and at university wrote her dissertation, for her MA in the history of art, about the artist. This great Orcadian was indeed a man of many talents, with many honours to his name, not least being the Queen’s Limner in Scotland. He was a masterful painter of portraits, of royalty, and of many others holding positions of importance or of some high office.

Once, Stanley Cursiter showed me an album in which was a photographic record of very many, if not all of his portraits. As he said, there were Lord Provosts, bishops and generals, university professors and chairmen of companies. The exhibition includes examples of his fine portrait work, drawings, etchings, and a spectacular still life study in black and white.

And then there are his magnificent paintings of Orkney’s sea and landscape a number of which Janette had been able to acquire on loan for the exhibition. 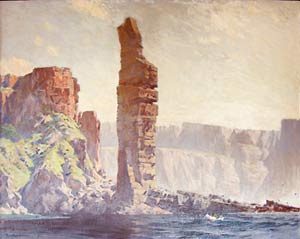 The Orcadian landscape is beautifully captured and in the seascapes one almost hears the sound of the sea and feels the wind and sun.

One such painting is a powerful seascape entitled Surf. This was his RSA Diploma piece (1937). Another great painting (to be seen in the Town Hall) is his impressive and atmospheric interpretation of the Old Man of Hoy (pictured on the right).

Anyway, back home from Stromness I came. For days since, when the weather was suitable, the wrapping of round bales has been going on apace. As I write, Sunday, July 21, two weeks or so later, this silage work is about complete.

Shortly, it will be punding time, when the native sheep will be shorn of last year’s coat of wool and the County Show is not far away. So, you see, we are almost into the Market time of year when the nights are beginning to draw in once again.

Yesterday was a magnificent day with bracing, droughty, northerly winds and the sun shone with some brilliance. Grass-wrapping machinery was going at it here and there and heavy tractors roared.

It was a pleasure to be out and about and I myself, pursuing a more sedentary occupation, set about painting a bit more on a Nissen hut. Then it rained at night.

Today has been mixed but now, at night, it’s raining once again and heavily. But Orkney can’t complain if we think about the unbelievable rain, floods and unseasonable weather experienced further south.

Well, here I am sitting outside my front door this Monday morning finishing off this letter. It’s sunny and warm for the moment.

Bluebottles are darting here and there. Their buzzing reminds me of days long ago when chests of clothes and all manner of interesting things were brought outside in the sun to air.

In the garden, sparkling little beads of last night’s rain decorate the leaves of the montbretia like scattered jewels.

A curlew is piping in the distance and some gulls are calling and wheeling high in the sky — more rain I shouldn’t wonder. From time to time a young family of swallows sweep and bank at high speed round the house, as they hunt for flying insects, and a little wren is singing cheerfully on a nearby dyke.