Well, the Harvest Home has been once again and in a few weeks it will be Yule. This celebration is an occasion that would surely be missed if it were to come to an end. If nothing else, there is the gathering together of residents, with friends, relations and invited guests coming to the island for the event.

Some come from as far afield as London, Derbyshire, Edinburgh, Glasgow and Elgin, and our many connections from the Orkney Mainland make a significant contribution. For one night in the year, over many a year, the island has managed this old-time get-together.

Probably, very shortly there will be no old fashioned harvest to save and no sheaves from which to make our decorations. And, as the years pass, hardly anyone in Orkney, or further afield, will know anything about the traditional harvest. The sheaves, simmans, and straw decorations will seem like some forgotten relics from the past, no longer having the same meaning or significance.

Already, the particular straw decorations that we make, to remind us of what the hairst used to be about, are only symbols, although they represent the very different produce of today’s farming. And the creel rope’s coloured buoy heads, which adorn the hall’s rafters, are also becoming symbols of the island fishing that used to be. Today, like the golden sheaves that have almost disappeared, the lobster, through general over-fishing, appears to be heading down the same inevitable road.

The Harvest Home was traditionally a rural celebration among farming folk. It cannot mean quite as much for those who are not connected with the land or the sea. Possibly for that reason, and the fact that agricultural methods have changed dramatically, some parishes in Orkney no longer hold this event.

This celebration, I believe, stems from the first settlers to the New World who also initially depended on the land’s produce. They respected and worked with the indigenous inhabitants who were the American Indians. As time went by, the growing numbers of incoming settlers became selfish and greedy, and set about getting rid of their once welcoming hosts and stealing their land. Interestingly, those same Indian communities regarded the land as an inheritance to be passed on to future generations with all its rights, privileges and responsibilities. Maybe we might learn something from those much maligned peoples.

Readers of The Orcadian will know about our sheep dyke damage. Well, a few of us have been rebuilding at least part of the structure. Now, as another ‘south-easter’ pounds our shoreline, things are at a standstill until the weather improves. It is fairly possible, so early in the winter, that what we have already re-built will go down again, and the thought of this happening is not a lightsome one.

The North Ronaldsay Lifeboat Guild has held their annual fund raising function when just over £900 was spent by islanders. The local guild president, Isobel Muir, opened proceedings, and along with members of her committee, got the many fund raising schemes under way. A good turnout of folk enjoyed this very successful affair, giving very generously as they always do.

Tea, sandwiches and home bakes followed when the raffle prizes and other prizes were presented. And just recently Dr Jeff Stone from Aberdeen University gave a talk on ‘Scottish maps and mapmakers’. Discussion followed with tea and biscuits available for refreshment. 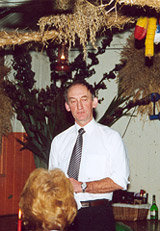 Mr Jockie Wood who was the guest speaker at the Harvest Home. (Picture: James Thomson)

But I have digressed a bit from talking about the Harvest Home. The association’s guests this year were the speaker, Jockie Wood and his wife Fiona; Christine Allan, along with her husband Pat, representing Loganair, and Captain Alastair Wylie, with his wife Lillian, was the representative from Orkney Ferries.

In the Memorial Hall on a wild, wet and windy night, with a draught or two of north wind here and a drop of rain there, proceedings got under way. Many heaters warmed up the old hall for the supper, and at about 8 o’clock the association’s president, Peter Donnelly, welcomed everybody to the Harvest Home. He went on to acknowledge all the workers who had in any way contributed towards the celebration.

Patricia Thomson said Grace and the traditional supper was served. At the end of the meal Peter spoke briefly about the changes he had seen in North Ronaldsay since moving to the island in 1988 and also talked about rural customs in Banbury – his home town – and the differences in farm machinery etc compared with working methods in North Ronaldsay at that time. Then Jockie Wood was invited to deliver his Harvest Home speech.

As with his Burns’ address of two years ago, this night’s gathering of around 80 folk enjoyed a speech which touched on all aspects of a traditional harvest. This was work, as he said, with which he had been familiar in his young days. Interspersed here and there were some highly amusing tales which he told with consummate artistry.

Jockie Wood began by thanking the association for inviting him and his wife to the ‘Muckle Supper’, as he described it later. He said how the sheaves, simmans and straw decorations in the hall reminded him of the hairsts of his youth and even reminding him of the work in the barn and byre which follows the gathering in of the harvest.

He painted a picture of hairsts which were carried out in golden days when everything was easy and pleasurable – the sort of times that we like to remember. The sun shone every day, the sheaves were perfect, stooking was a pleasure and fun was the order of the day. There were welcome breaks throughout the work when tea and pancakes, queen cakes and Sun-joy for the bairns, were served in the field. But then he painted a contrasting picture when crops were flat and scythes had to be used; when it rained from day to day; when the stooks, blown down by high winds, were re-stooked by workers (often in oilskins) who might very well have had to repeat the process; the building of disses, if the weather was bad which, when they were sufficiently dry, still had to be built into a stack. And sometimes the odd stack, if it had taken heat, had to be taken down and rebuilt. But in between those two extremes were the times when memories of the hairst were good: the unforgettable memories that come from neighbours working together with even the old folk wanting to help and doing what they could; the great gatherings of people old and young; and the real feeling of achievement and satisfaction that came after either a good or bad season.

Jockie quoted, from time to time, from the works of three great Orcadians: Ernest Marwick, George Mackay Brown, and Robert Rendall – men who knew about the value of tradition and the importance of our Orcadian history. He went on to mention old traditions connected with the last sheaf to be brought into the stack yard, one of which for example, was when the unfortunate person who was last off the field, had his breeks removed and his posterior well brushed with a sheaf covered in treacle.

Finally, Jockie referred to the changes that had come about in farming. Today it was mostly silage and barley harvested by modern machinery with hardly any neeps or oats being grown. The work is easier but the feeling of relief after days of hard and often uncomfortable work, experienced in the old days, had gone.

Nevertheless, he still thought it was good to have a celebration for the year’s bounties. He hoped that North Ronaldsay would flourish and that the Harvest Home on the island would continue into the future. With that closing statement the speaker asked everyone to be upstanding and to toast the harvest. 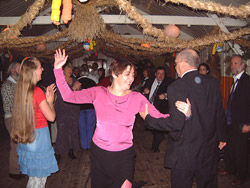 Dancing in the isles! There was music from accordions, recorder and Highland bagpipes, (Picture: Peter Donnelly)

Then the evening unfolded in a jiffy. Out went the long tables and the trestles into the fierce, wet and windy night. Helpers soon swept through the washing-up, and shortly the dance began with music from accordions, recorder, and the Highland bagpipes, played respectively by the musicians, Lottie, Ann, Howie and Sinclair. During the evening, raffle tickets were sold for the second year running in aid of funds for new windows for the Memorial Hall. Many splendid gifts had been donated for the raffle and a very gratifying sum of over £355 was raised. In addition, the Scott family from South Gravity had very generously donated £300. And Mike Pascoe, one of the original team of divers, who had lodged in the Memorial Hall in the mid-1970s, indicated that a number of the team were very happy to contribute towards the window project. This team, under the leadership of Rex Cowan, had been exploring the wreck of the Svecia, lost on the Reef Dyke in 1740.

Dancing continued in grand style until around three in the morning with a total of some 18 dances being enjoyed before the last waltz. After Auld Lang Syne was sung, soup, native mutton, home bakes and sandwiches were served to round off another great Harvest Home.

The next day saw a brief respite from the inclement weather when it was dry and the northerly wind was down. The Fair Isle was especially clear with Foula visible on the horizon – an event which usually heralds southeast wind and rain. In the late afternoon the hall clearing got under way. 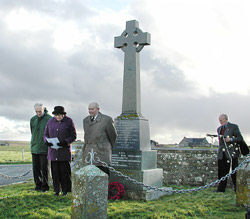 That was fun, with an eightsome reel being danced before the helpers finally left. Then a second little celebration got under way at Verracott with the Tullochs from Stromness as hosts. Howie Firth was in cracking form among a lively company who finally broke up well past the ‘heuld’ of the night. As I left, an almost full moon shone in the western sky and the sea below was bright in the cold moonlight.

The next day was Sunday and, along with our Harvest Home visitors, we gathered at the War Memorial for a short Service of Remembrance.

Since then the wind has gone into the southeast with considerable force and there it continues to be. The east side of the island is being swept by heavy seas that are riding high and breaking all over Linklet Bay and to the ‘suthard’. The outlying Reef Dyke and the ‘Shaald o’ Dennis Taing’ are mostly a line of white breakers and a salt spray fills the air along with driving rain. One consolation, I suppose, is that the spring tides of this south-easter are less high than the onslaught that recently demolished extensive areas of the sheep dyke. Certainly the winter has come upon us early, and with a vengeance. The long warm summer we all enjoyed seems far away tonight as I listen to the sound of the southeast wind rattling the roof slates, and whistling in under our front door. ‘Tomorrow is another day’ as they say; and as is often said in North Ronaldsay ‘anither year we niver saa’.