This last few days seem like a belated Indian Summer and very acceptable and pleasant it has been.

Yesterday, October 6, the North Ronaldsay Primary School held an open day, and today the holidays begin for the October break.

How very fine it is to have a week or more clear from school midway between summer and winter. I’m trying to remember if, in my school days – some 60 years ago – there were mid-term holidays.

I seem to recall what we called the ‘tattie holidays’ but can’t at the moment get my memory to come up with any clear-cut recollections – a sign, no doubt, of advancing old age.

Talking for a moment about tattie holidays, today, there are very few crofts on the island with this particular crop, and I suppose it would be difficult to justify a school break.

But “Times they are a -changing,” in the words of the Bob Dylan (or is it Woody Guthrie) song.

Anyhow, I was out in the land the other day helping, with others, to gather our next door neighbour’s tatties. Many hands make light work, and in a couple of grand days the job was lightsomely completed.

But to get back to the end of term day. The weather was beautiful with almost summer sunshine and warm southerly winds. A good turnout came to enjoy the school’s open day.

The occasion this time was rather special and perhaps a little sad at the same time, as this open day marks Patricia Wilson’s retirement from teaching – a nice way indeed to end her ten years’ work as head teacher at the island school.

The main hall (partly curtained off) was light and airy with the afternoon sunshine streaming in through the windowed doorways.

Craftwork was the main theme, with many items for sale. This time the venture was run under the banner of The Old Lighthouse Enterprise (small business experience project).

Some of the work was not for sale, such as felt creations, and some beautiful fabric paintings. The travelling art teacher, Christina Sargent, had helped with this artistic work.

The pupils had also attended a class at Andrew Appleby’s pottery (Fursbreck Pottery), where, under Andrew’s supervision, each had thrown a small bowl and very attractive they were. Andrew had donated one of his own pieces to the school.

On the walls were photographs of the pupils visiting the Corrigall Farm Museum where they made simmans, ground corn by hand and thrashed some sheaves with the old fashioned flail.

In addition, during the term, there were regular swimming lessons; varied activities at the Pickaquoy sports centre and a visit to the Orkney Science Festival.

Particia mentioned how hard her pupils had worked on the project and, in fact, all year at their studies and how talented they were.

All had won certificates for their good behaviour and hard work, each being presented with their individual certificates and a gift voucher.

Patricia went on to say that Heather Woodbridge was the primary six winner (Orkney schools) of the best design for Pudsey Bear (Children-in-Need competition) subsequently engraved on a set of glasses and a decanter. The set was then auctioned in Kirkwall for Children-in-Need.

Duncan Gray, captain of the ‘Kirkwall A’ rugby team and winner of a number of medals for his playing skills, was praised for his efforts, as was his brother Cameron, who also travels to Kirkwall to play.

An impressive winning trophy was on display which will shortly have the team’s own engraved shield attached. Duncan, as captain of the rugby team, is allowed to have the trophy for a time.

Gavin Woodbridge was also mentioned, a pupil who has his own special talents, and pre-school pupil, Ronan Gray, who had perfect attendance with good behaviour, was not forgotten. 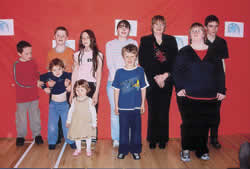 Patricia went on to thank everyone connected with the school. All had helped in one way and another to make her ten years on North Ronaldsay so enjoyable. Her four pupils then presented their own farewell gift – a beautiful framed photograph of the New Lighthouse taken by Marion Muir.

Tea with all sorts of homebakes was then served to complete a most pleasant afternoon.

A day or two has passed. This morning, Saturday, after a night of continuous rain, I flew into Kirkwall by Loganair in order to attend the opening of Bryce Wilson’s exhibition held in the Orkney Museum. That was enjoyable.

How nice it is to see this artist able to be painting again now that he has retired from his demanding post as museums officer.

By the late afternoon the grey skies had cleared, and it was a pleasure to drive through part of the Mainland in sunshine with the wonderful changing colours that Orkney is so famous for.

I suppose one could spend a week or two just travelling on the Mainland never even speaking of the islands. Imagine spending almost a lifetime without getting round to doing such things.

Now I’m back in North Ronaldsay and just home from Patricia Wilson’s farewell party which took place in the New Centre. I’m beginning, well past the ‘heuld’, to make a start to writing up the occasion.

Evelyn Gray, the new president of the community association, welcomed everybody and invited Gerald Morris to show a laptop presentation of photographs taken by him and his wife June.

The selection covered a year on the island. It was enjoyable to be reminded of some of the sights and sounds of the passing months.

Firstly, Penny introduced Heather Woodbridge (the eldest pupil) who played a farewell piece for Patricia on her violin.

Penny continued, explaining how she was attending this special event on behalf of the education department.

In her speech, she was profuse in her praise of Patricia’s contribution to teaching on the island; how she had given her pupils many opportunities to meet others of their age group by travelling to the Orkney Mainland.

There, the pupils had experienced and learned much about so many aspects of Orkney’s life and history along with active participation in all sorts of educational activities.

Penny went on to say how much she had enjoyed coming out to the North Ronaldsay School and wished Patricia a happy retirement.

She then presented Patricia with a framed Certificate of Excellence from the education department for her ten years service as head teacher.

In my further tribute to Patricia, as a former member of the community association, I noted her great support for community events; her supply of wonderful homebakes for every possible function – even sometimes when she was not on the island; the much enjoyed end of term open days; her contribution to the religious aspect of island life; the many school concerts and other presentations where she made use of her musical talents, both as a singer and accompanist, to inspire her pupils.

Evelyn, on behalf of the island, then presented Patricia with beautiful gifts: a Freda Bayne cushion woven of wool from the native sheep; a rug also made from the same unique wool, and earrings by Sheila Fleet.

Drinks were then raised in a toast, proposed by Evelyn, wishing Patricia a happy retirement.

In her reply, Patricia said how much she had enjoyed her ten years on the island; how she would especially remember her pupils and the joy they had brought her; the many community events over the years; how she had enjoyed the privilege of getting to know the island and its people and the friendliness shown.

She mentioned the efforts that were being made to revitalise the island and how she hoped we would succeed; how she would be following the progress of her pupils and the community as the years passed. Finally, she thanked the island for the wonderful gifts she had received.

With those pleasant proceedings at an end, tea was served along with all sorts of delicious things to eat: sandwiches, pies, shortbread and home-bakes. For a little longer folk relaxed and talked, having enjoyed a memorable evening.

To finish this letter I go back to the school’s open day. As I left on that sunny afternoon I was reminded of past times – some 60 years ago when I attended the school.

I walked over what remains of the old playground, remembering exciting battles fought between ‘soothyard’ and ‘northyard’ (either ends of the island), when we used ‘bombs’ made of firmly tied long grass; of games of rounders and lea-o-ley and other games for the moment forgotten.

Then I walked down the south school brae where I once travelled all those years ago.

For a short time I was a ‘soothyard’ person as my home was at Cruesbreck, where I was born, on the south side of the island. Then I became a ‘northyard’ resident as the family moved to a new home in ‘Link-lis-toon’ (Linklet toon) – a northyard toonship. So now I was to battle for fun with my former colleagues!

A little down the brae, as I retraced my steps, I stopped to look at the old school well with its little protective dyke.

There the cast iron pump stands unused but remarkably, almost unchanged. Often pupils would be asked to bring water in a galvanised pail for the classroom.

Down the familiar brae I walked but the landscape is missing the many oats and corn stacks that took one’s eye at this time of year, and the prominent building of the island’s mill, working when I was living at Cruesbreck (and for a time afterwards) is now silent and empty. Still, the houses are there. Four are nicely renovated in keeping with the island, with three harbouring new islanders. Others are derelict with their inhabitants long gone.

Now, I turned north. Along the road verges silver weed in autumn colours of orange and dull silver decorated the roadways. A few tattered sow thistles, past their prime, sadly hung their heads.

All of a sudden a golden plover flew swiftly past, and in the distance I could hear the piping of the curlew – or as we call them the ‘whap’.

Before long I had arrived at the stone-built ‘turlie stile’ (once a turning gate) now rebuilt to the east of the new tarmac road.

For many years it was the way up the north school brae – though there was also an ordinary small gate.

Many a time we all climbed over its stone steps as many generations of scholars (as the old folk called them) before us had done, making our way to school up the grassy path.

A nearby stream still runs as it used to do coming from hilly ground to the west.

Well, when last I wrote it was the time of the harvest moon, in another good week it will be the hunter’s moon.

It is chilly outside and the sky is dark but clear. Stars are twinkling brightly with the plough dominating the northern sky, and I can hear the west sea sounding behind Antabreck in the south-westerly wind.

I was just thinking about some of what I have been saying. Yes, as I mentioned earlier, “Times they are a-changing”.