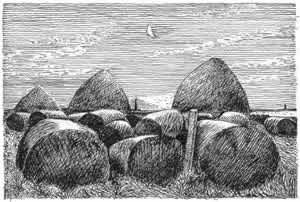 Old and new . . . oat stacks and silage bales in the moonlight,
from a line drawing by Ian Scott

Yes, this is ‘hairst’ again – not like the hairsts of old, but, nevertheless, a little oats is ready to be cut and the old binder will shortly be going ‘clickity clack’.

I was thinking the other day, as my crop of oats was ripening and getting ready to shear, it would be fun to keep a little diary of events before the old ‘hairst’ work passes finally into history. So here I go once again with another island letter.

Today is Sunday August 24. The day is very fine, warm, with a light northerly wind. I thought that the occasion had come to bring out our old Albion binder from her winter quarters.

“On a Sunday?” the old folks would say.

It takes a little time to manage this operation, as the machine has to be pulled out of a shed and then changed over from transport rig into cutting mode. It entails removing transport wheels; adding a platform wheel; checking on this and that as best I can; re-greasing working parts; buckling on three canvas sheets (that keep the cut oats moving up into the sheaf-making mechanism), re-sharpening the long cutting knife and so on.

But all this is too complicated to even begin to describe to someone who knows little about binders, sheaves and harvest work.

Suffice it to say that by late afternoon everything was ready to begin.

My ever-helpful neighbour from next door shortly came up with his tractor and soon we were cutting the oats.

Clickity, clickity, clack went the old binder up and down the field, opening up the possibilities of shearing until eventually the main cutting direction, one way and diamond-wise, was achieved.

By 8.30pm, with the dew beginning to fall, and having made a good start, we stopped, ready to cut in earnest the next morning.

Monday August 25. Awoke at six, got up, set the table for breakfast for two visitors who had arrived yesterday for a short stay.

Went out into a beautiful morning and stooked up a line of stooks, thereby clearing a working area for easier manoeuvrability for the tractor and binder. By 10am we were out ready for action. Again the day was warm, with a light wind from the north, and the Fair Isle, in the east, was up clear and blue.

As we worked across the field, to suit the lay of the crop, the sun faced our cutting direction, bright, and comfortably warm.

Back we drove into the cool north wind, and back into the sunshine we came cutting an ever-lessening area.

Hardly a ‘stick’ was there as the sheaves fell rhythmically in long lines. By about one in the afternoon, just before dinner, the remaining stalks of oats fell onto the moving sheet, and, with a clickity clack, and a whirring of packers and needle, the last tied sheaf – “The last of all” as Mary o’ ‘Girnavald’ used to say, fell on to the shorn field.

Tuesday August 26. This is a really fine day. The wind is still in the north and despite the now paler blue of the sky – as it becomes at the back end of the year – the sea is a dark ultramarine and the sun is well up. I’ve had a lazy morning and I can imagine the sun saying: “Time to stop this dilly dallying, snap out of it and get the stooking done.”

Yesterday, when we were bindering, two helpers made a start to the stooking. Today is a great day to stook up the remainder, and had North Ronaldsay enjoyed such a fine season in the old days all their ‘hairst’ work would have been relatively easy.

You know, even when there was field upon field to cut; when the rain and wind came; when the oats or corn was flat or tangled; when the binder sheets tore under un-righteous strain and there were continual stoppages; when hands and body (sitting on tractor and binder) often became uncomfortably cold; when sheaves were in a bit of a mess and every other one required trimming, and when finally everything was safely built into stacks in the yard or the field, there was, even still, a feeling of the greatest satisfaction.

Well, today was absolutely grand. The cooling light north wind gave a tingle to the face and my bare legs (I had bretted – turned up – my trousers to the knee for ease), and yet the morning sunshine was very pleasant and warm.

Hardly a sheaf did I have to trim. Up with two sheaves, and two to either side; next stook; then a line, then another; stop, have a casual look to the east, to the north and round about; take in a breath of the north wind, begin again. Crinkle, crinkle went the stubble underfoot.

Three pieces of broken crockery I found, one with a blue pattern. Once upon a time Antabreck folk I never knew or saw sat round a table with the original dishes before them.

One day they broke, bits found their way into the midden, and thence out into the field with the ‘dung’. It’s strange, though a little sad, to think that those pieces of broken crockery, some old photographs, a family bible and gravestones, are about all, apart from a little history, that really remains of that generation.

So, here I was, feeling fine, and very leisurely stooking up my sheaves. Every now and again a curlew would whistle or some other familiar bird would fly past.

Once a great airliner passed overhead flying into the northwest leaving behind two long, white vapour trails and the sound of her engines. Imagine the contrast between that technology and the rather primitive – some would say – goings-on in the hairst field below.

Well, well! as my Faroese friend, Sofus Olsen, might have said. Before very long the swishing, rustling sound of sheaves being ‘clapped’ together came to an end, and across the yellow stubbled field row upon row of stooks looked bonny, echoing in the mind this once very familiar sight that covered so much of the island.

Thursday August 28 together with the next day saw the binder cleaned, greased, and back into the old shed. I still should, before too long, sharpen the two five-foot cutting knives, check on the canvas sheets etc before the job is properly done and everything is ready for another time.

Four days have passed with sun and drying winds. This is Monday the first day of September.

Away back on May 4 (another Sunday), I see in my diary, I was out sowing this very field of oats by hand like an ‘aald-fashioned fermer’ – as I now have become.

The field was ley, ploughed on the first day of May (helped again by my neighbour). Normally, ley would have been sown long before, but the gods have smiled favourably upon me and my middling ways this season.

Today is looking a bit like drizzle or light rain with a southwesterly wind blowing – it’s the Orkney forecast. I’ve been to Trebb (the island shop) for lemonade, chocolate and biscuits ready for leading – which means building my stacks.

I saw Foula up in the north – a sign of rain. The day is cloudy and the sky a silvery grey, with faraway blues and pale greens here and there. In the early afternoon leading began, with a few helpers bringing in sheaves and pitching them into stacks.

After two stacks were built, light drizzle, which had begun to fall as we worked on the second stack, got too persistent and put an end to operations.

Wednesday September 3. A dull damp day has passed but this new day is wonderful. It’s warm with a light south-westerly wind – a grand leading day. Eighty-six or so stooks remain to be built – a smallish stack of some 344 sheaves. A few folk helped for the fun of it all and by the late afternoon the last stack was finished.

As we refreshed ourselves with lemonade and biscuits the late afternoon sun turned the stacks golden.

Across the now bare stubble field, to the east, the New Lighthouse was singled out by isolated rays from the sun for a moment or two, and further out to sea an oilrig broke the horizon. How very splendid this all is, I thought to myself.

Yet, as they say: “The writing is on the wall.” Time moves on with its changes and no one knows what another year will bring. I’m ending my hairst diary here but will have to think of a suitable closing paragraph or two.

I have to confess that I have been putting all this together on a most beautiful day, and this very minute, I am going to take a chair outside to the front of the house so as to think about, and write, my final paragraphs.

I’m now sitting on a chair with a cup o’ tea at my side. I have it perched on the web of an old creel where once maybe, from the inside, a bold blue-black lobster eyed me with fury and snapped his formidable claws.

There is hardly a breath of air and the sun is absolutely brilliant and warm and there flutters a Red Admiral. I can hear the drone of a faraway plane in the east flying to Shetland maybe, and bees are busy in a great spread of still colourful montbretia.

Blue bottles are humming and flying all over the place. A starling is chuckling, and mimicking away on my chimney, and a little wren is singing.

Honestly, this is a magnificent day – as good, if not better, than any of this long special summer. I know that at the back of my mind many undone chores are tapping away, but today I simply won’t give up my freedom and leisure (it’s too hot to work at the moment anyway).

I’m beginning, though, to wonder if some of those jobs will ever get done. Now I can hear a dog barking next door and an occasional ‘bogle’ comes over the air from some very comfortable and lazy cows.

In the evening, when it is clear, Mars is the talk of the town, and a couple of nights ago I saw a waxing moon glowing, lantern-like, and orange coloured in the southern sky.

She was beautiful, sliding seemingly from time to time behind some low cloud. She is, as most will know, the Harvest moon.

The very thought of this moon sets alive the treasure house of memory, and brings back pleasantly, for a ‘peedie’ while, the days of yore and the lightsome ‘hairst’ time of year.