When last I wrote, it was the time of the Harvest Moon. More than two months have passed since then and when I stood outside after the ‘heuld’ to think of some way of ending my ‘hairst’ letter.

Tonight, I begin with the same process — outside as the midnight hour slips away.

Again, I heard that same familiar bird, the lapwing or tee-wup, cry. And may I call her the Harvest Home moon? For we have just ‘goodly’ had our harvest celebration — well, she is to be seen just as in my last letter.

In the old days, special island events were usually planned to coincide with the growing moon, so that folk could more easily make their way by foot to whichever venue it was planned for.

Anyway, the night is still fairly calm, though a strong south-west wind is forecast for tomorrow with our weekly ferry already cancelled.

What is left of a fading moon, encircled by a great halo, is shining palely in a hazy sky and the west sea is grumbling away in the distance. I have a feeling that tomorrow will not be such a good day.

I’m at my keyboard again (another day) and the forecast has proved to be accurate. Strong winds are blowing from the predicted airt and rain has been coming and going in heavy showers since the early morning. Sometimes even hail has rattled the windows.

How shall I cover our Harvest Home (held on November 3) I wonder, for to lose two folk of the island in the midst of such preparations has thrown a shadow upon all our activities.

Already, as I write, a week has almost passed since the event in the Memorial Hall an enjoyable event, yet one has the recurring feeling that something of North Ronaldsay has slipped away.

On my living room table there are two commemorative leaflets brought back from two island funerals, which took place shortly after the Harvest Home. 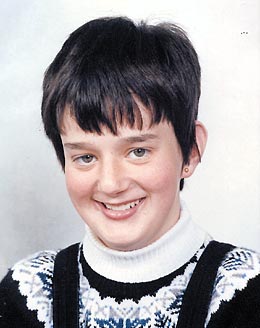 Lesley Ann Scott, who died the day before the North Ronaldsay Harvest Home.

One is for Lesley Ann Scott, born May 4, 1968 and died on November 2, the day before the Harvest Home.

There was Lesley, a fighter to the last. Despite setbacks and illness that would have been a daunting challenge for the most courageous, she was determined in her own mind to get better.

Even during her school days on the island and her time living at Cruesbreck (her early home) with Cathy and Sinclair and her two brothers, Michael and Graeme, she set out to master certain obstacles and later, in Kirkwall, when she so enjoyed working at Glue’s Garden Centre.

There she carried out all sorts of tasks, which included not only gardening, but also visiting shops on behalf of the garden centre.

Through this employment hers became a well-liked face and she was proud to live and work in Kirkwall. Lesley wanted to be independent and manage her own affairs and to follow her own ideas of living and upon that aim she focused her mind.

Thirty-eight years is a short lifetime but they were years in which Lesley managed to find enjoyment and to impart some of that fun and laughter for others to remember.

The other commemorative leaflet is for William Alister Muir, Waterhouse. Born August 8, 1923 and died on November 3, just before the Harvest Home began.

Willie, who, like Lesley, had had to face severe illness, pain and discomfort, also fought back with determination.

He always looked forward rather than backwards. He went on after his illness, and during retirement, to carry out many renovation projects at home, and at his daughters’ houses in the south, and create some wonderful stonework round the neat and tidy home of Waterhouse.

After school on the island, Willie spent a short time working at the Kirkwall Post Office.

Then, in order to volunteer for the Royal Navy, he worked in Glasgow before joining as a wireless operator during the war. He was based in Ceylon, intercepting Japanese transmissions.

After the war, he returned to North Ronaldsay to rebuild his parent’s home. Then he again left for the south in 1949, where, along with John Swanney, North Gravity, a fellow islander (also a wireless operator but in the RAF) he worked at the MoD wireless station in Loughborough.

Willie came back to North Ronaldsay four years later to take over his parent’s croft, and return to his great love the sea as a very competent seaman and lobster fisherman.

He married Amy Swanney and they had two daughters, Anita and Maureen. Willie served in the Coastguard, the district council and as registrar. He was familiar too as an accordion player when, along with Lottie Tulloch, they both played accordion at many an island function, and at many a Harvest Home.

Both Lesley and Willie’s funerals were well attended with many friends and relatives travelling by Loganair to and from the island. The ‘Gods smiled favourably’ on those final days of parting as they did for the Harvest Home about which I will now continue.

About 90 attended the event. The guest speaker this year was Richard Shearer, from the well-established shop of W. Shearer in Victoria Street, Kirkwall. He was accompanied by his wife Audrey.

The association’s other guests were the Loganair pilot, Colin McAllister, his wife Jane, and daughters Mea and Rowan.

She referred to the Old Beacon and the island’s success in reaching the final of the BBC’s Restoration Village.

She acknowledged the many helpers who had made the evening possible before starting off proceedings by asking John Cutt to say the grace.

The supper was as magnificent as ever. This is the part I really enjoy, with decorations, candles and old-fashioned lighting, and the anticipation of the toast to the harvest.

A few intimations were made concerning progress in the Memorial Hall and prospective work planned for next year. Richard was then invited to propose the toast to the harvest.

Richard, like Evelyn, paid tribute to Lesley and Willie reminding us that tonight was a time of thanksgiving for the year’s bounties and for good company and friends past and present.

He referred to the 50’s TV programme The Twilight Zone which he felt one experienced tonight as the interior of old hall felt like a step back in time, and of how it reminded him of a similar war-time hall in Tankerness and great nights enjoyed there.

He thought that whatever we did with the hall, we should never change the interior, which he felt had so much character and atmosphere.

He mentioned the Old Beacon and its success but said that maybe we should watch out that Sanday did not ask for the return of their masonry ball! (Once it graced the Start Point beacon in Sanday.)

Richard went on to mention when he, aged 12, first visited North Ronaldsay some 40 years ago, sailing on the ss Earl Thorfinn with his father William.

On that occasion, William Shearer was selling the old coir stack nets and Richard remembers their visits to the farm of Howar and the two island shops.

Then, after a funny story or two, he produced, one by one, from a large bag, symbols of the old-time ‘hairst’: first the sheaf with its many uses next year’s seed, even providing a filler for the old-fashioned bed-sack, etc.

Second was a coir stack net, important in the protection of the harvested stacks and a reminder of that first visit to the island, and lastly a vintage bottle of ale, another by-product of the ‘hairst’ fields.

After presenting the sheaf and stack net for safe-keeping, the bottle of ale was emptied into a suitable receptacle to be sampled by the company. The speaker then asked everyone to be up-standing and to toast the Harvest Home.

Martin Gray followed by proposing a toast to the Memorial Hall thus ending those pleasant proceedings.

Soon the dance got under way with the local band, including Howie Firth, back once more for the Harvest Home, providing the music.

During a welcome tea-break, Evelyn and Ian Deyell supervised the raffle. A great selection of kindly donated items were available, including two framed watercolours, one of which was auctioned for £330 by Richard Shearer.

Total proceeds for the ongoing costs and improvements to the Memorial Hall amounted to a magnificent sum of over £600.

A few more dances brought the evening almost to a close. After Auld Lang Syne, hot soup and sandwiches were served. By about three in the morning most of the company were winding their way home.

By early evening the next day, after the usual lightsome tidying up, the old hall was empty and bare. One more Harvest Home joins the passage of the years but with it will always be linked the names of two, now gone, who loved North Ronaldsay.

Well folks, I’ve come to the end of this letter. All day long the weather has been particularly unpleasant with gale force winds from the north-west. Showers of rain, and occasionally hail, has lashed across the island from time to time.

As I write those last few lines, a tremendous west sea thunders above the sound of the wind I have just been outside.

The sky has clear spaces here and there; almost luminous against menacing black cloud that seem to fly. In those few spaces, stars sparkle coldly and this year’s Harvest Home moon no longer lights the wintry sky.

Today, there is a lull in the weather and it is Remembrance Sunday. At the war memorial, a well-attended short service of remembrance was conducted by John Cutt, Gerbo.

The wind was down but the sound of the tormented sea carried across the island. To the west and north heavy seas pounded the rocky shoreline and across the ‘Riff Dyke’ great waves were travelling south.