It would seem, from the opinion of archaeologists and other experts, that the earliest people living on Orkney go back over 5,000 years.

It also seems likely that those people, apart from hunting and fishing, grew grain. This grain is believed to have been a form of bere, or corn as we call it locally, a version of barley grown in our islands until recent times.

I was thinking, it might also be reasonable to assume people have lived on North Ronaldsay for probably as long as on the Orkney Mainland.

Over all those years, until 2005, one could argue that grain, of one sort or another, has been grown, harvested and re-sown on this island.

Some barley is produced today for silage, but no longer are sheaves built into stacks, brought inside and thrashed to supply grain for another year’s crop.

No longer do we hear the thud of the mill engine nor the hum of the high-speed drum as it thrashes the sheaves.

This break in the island’s long history of farming practices does have a ring of finality about it.

To cease something that has gone on for thousands of years without a break is a thought and a milestone in our history.

I suppose that in the evolution of agricultural methods, the ‘saaing cubbie’, sickle, scythe, reaper, binder and baler, and, more recently, silage-making and so on, constituted milestones.

Yet, to have sown seed by hand until 2004 – however old fashioned and unprogressive it may have been – continued a very long historical tradition.

The other night, I was reading through some of my late father’s diaries – in particular the year 1962.

It might be interesting to mention an entry or two and see what was happening 43 years ago around the harvest time of year.

On September 6, he mentions taking out the binder and beginning to cut corn. Oats was the main crop and by the end of September the cutting was finished.

By October 10 the leading, or taking in and building the crop into stacks, was completed. He says that a total of 21 stacks were built at Antabreck with five at Napp (an additional small croft).

Another farm, Cruesbreck, where my uncle lived, was also helped, and though he doesn’t mention the total number of stacks built for 1962, the total for 1964 was 48 stacks. The number in 1962 would have been similar.

Next came the lifting of the tatties, with the resulting 60 sacks being put up on dykes to dry before taking in and sorting.

Then, on October 19, leading at Holland farm, followed a day later by six loads of dung put out on the shift at ‘Danald’s dyke’ – Donald Thomson was a previous owner of Antabreck.

A further seven loads emptied the middens and on October 23 he began to plough ley. By the end of the month, all of Antabreck’s animals were in their winter quarters and on November 2, the first stack of corn was brought into the barn for thrashing, and on that night the island’s harvest home took place.

At the end of the month, corn was being steeped for the making of malt. Later, the steeped corn was spread out on the barn’s loft floor, previously swept and washed for the purpose.

Thus began the process, which would culminate in the making of the North Ronaldsay home brewed ale and the subsequent great Yule celebrations.

Well, folks, all of this brings me to our harvest home which took place in the Memorial Hall, on October 28.

Upwards of 90 attended the event, with many coming to the island by courtesy of Loganair – all friends and relatives to boost our numbers, with six of those coming from as far afield as Cornwall, Banbury, Aberdeen and Elgin.

Guest speaker was Robbie Fraser who was accompanied by his wife Eileen, and the Grieve Family from Rousay – Athol, Ellen, James and Kirsty – had been invited to provide music for the dance, giving our local players a break. Evelyn Gray, the North Ronaldsay Community Association’s president, welcomed the guests and company.

She thanked all the folk who make the evening possible and hoped that the harvest home would be greatly enjoyed.

I then gave a report on the Memorial Hall. Tarring and minor repairs had been carried out. Two new windows remain to be bought and installed (five were fitted last year). Mention was made of the absence of new sheaf decorations; only a token number had been saved from 2004.

Stowers, a type of long, reed grass which grows in the vicinity of loch areas, was used very successfully instead. The person who suggested such a convenient alternative remains unnamed.

Suffice it to say that this individual, apart from trying with difficulty to keep me on my toes with my farming efforts, even comes up with ideas for decorating.

In the past, stowers or bent was used extensively and very satisfactorily, to build in binders and other farm implements to protect them from the weather, rather than housing them in a shed when such storage space was not always available.

It was also used, and still is at one farm, to thatch roofs. The rough grass is cut and made into sheaves and gives good protection.

There are still sufficient straw simmans for a year or two – rolled into large balls they survive for a while. But what then? Shall we be like Robbie Fraser, who, as you will see, went back for fun to the old ways?

After the supper, which included native mutton, cold cooked meats and clapshot, followed by cheesecake and cream, with tea and cakes to finish, Radio Orkney’s Robbie was invited to deliver his harvest home tribute. 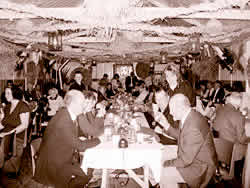 He began by saying how pleased he and his wife were to be present. He went on to say how the harvest work had changed greatly over the years.

Today, with good weather, a four-day spell could complete the harvesting.

He described how, at their farm in Rendall, they had grown around two acres of oats and had harvested it in the old fashioned way – binder, stooks and some small ‘disses’. This work had been great fun, with neighbours helping.

Among other observations, he mentioned that 2005 had been a difficult year, with a poor summer and prices down at the mart – £180 or so less per stot.

He hoped that next year would bring better weather and better prices. Drawing to a close, he said that we were here to celebrate the harvest of the year – whatever people’s efforts had been. Robbie then proposed the toast to the harvest.

Tables and dishes were quickly cleared away before the Grieve band played for the first dance – the favourite Strip the Willow.

At least three were danced throughout the evening. If ever one wants to liven up the proceedings, announce a Strip the Willow and speed up the tempo.

Later, a raffle (run for the benefit of the Memorial Hall’s funds) consisting of a watercolour and numerous other prizes was held.

An excellent sum of £295 was raised. Robbie Fraser, returning in splendid form to his old job as an auctioneer, sold a second watercolour for £315. This brought the total amount raised to a magnificent sum of over £600. Tea, sandwiches, and homebakes were served during the break. 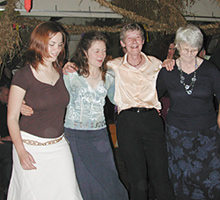 On went the dance in great style with the band and dancers stepping up the tempo.

Four sets of an Eightsome Reel, danced madly as if by whirling dervishes, fairly shook the floor before the last dance was announced.

By 2.30am, it was time for Auld Lang Syne. The memorable evening was brought to a close with hot soup, sandwiches and more native mutton.

That is how, for the 15th year since returning to the old venue of the Memorial Hall for this special event, we celebrated the North Ronaldsay Harvest Home.

As we left the hall, well after three in the morning, the night was quite beautiful. There was a warm wind from the southward and a starry sky was dominated by the Milky Way which glowed brightly across the velvety blackness.

In the east, not far above the horizon, the crescent moon, still cast a little light across the eastern sea.

I was going to say that for a while, we have been enjoying an Indian summer and even as I write, on November 6, the weather for this time of year has been wonderful.

I have just come in from a little walk in the mirking. The sky, rose coloured across the southwest in the afterglow of the sunset, is almost clear except for a few dark purple clouds here and there.

The new moon, crescent shaped just like as on the harvest home night but now rising in the southern sky instead of setting in the east, is quite beautiful.

She will soon disappear, but, for the moment, her luminous, orange-coloured light seems like a lantern just above the horizon. No stars are as yet visible though Mars is a reddish light in the east and the darkening, grey-blue sea seems cold and far away.

By the way, the harvest home tidying-up-day fairly had the helpers in sparkling form, and dancing when finished, with as much enthusiasm as on the night before.

And then, at another venue, celebrations continued until the early hours, finishing with a rather spectacular and furiously-danced Eightsome Reel. The dancers, I’m sure, would have held their own with the fearsome performers in the churchyard at Alloway made famous by Rabbie Burns.

Yes, we certainly had a great harvest home weekend!