This letter, which I am beginning to write on Saturday, January 26, is to be one of contrasts I think. Yesterday was, of course, Robert Burns’ birthday, and the great difference, weather-wise, between yesterday and today sets me thinking about change and comparisons.

This is the time of year when Robert Burns comes to mind and yesterday’s weather certainly could not have been more appropriate for celebrating his birthday. The frozen ground and sprinklings of snow were fairly in keeping with his descriptions of January.

When Januar’ wind was blawing cauld,
As to the north I took my way.

Our monarch’s hindmost year but ane
Was five- and- twenty days begun,
‘Twas then a blast o’ Jan’war’ win’
Blew hansel in on Robin.

Hansel, by the way, means a gift to express good wishes at the beginning of a New Year. Today, with the frost completely gone, sheets of water lie here and there across the island after a night of incessant rain and strong south-easterly winds. In the morning, a sudden ominous calmness had replaced the upheaval of the night, and across the east end of the island a misty spray bore inland, rising from a heavy sea. Even the sun gave noticeable warmth to one’s face – in fact everything had changed dramatically.

Well, here I am at Burns again. Yes, once more, in a small adjoining room in the New Centre, we managed to have a little get-together in memory of the poet. Despite unpleasant weather, colds and other ups and downs, everybody who was able to attend agreed, that we had done justice to a man whose life is celebrated the world over. Yet, curiously, despite this recognition, there are those who will continue to dismiss the man and his work.

O ye, wha are sae guid yoursel,
Sae pious and sae holy,
Ye’ve nought to do but mark and tell
Your Neebour’s fauts and folly!
‘Address to the Unco Guid’
Burns.

So, on Burns’ Night, with tartan rugs, illustrations from his poems, red roses, candles and lamps, and a few folk from across the Firth to add to our number, the ‘e’enin’ got underway. Peter Donnelly, the NRCA president, welcomed the company and acknowledged the work of all those who had made the evening possible. Guests this year were the speaker Archie Bevan, accompanied by his wife Elizabeth, and musicians, Susan and Chris Webb. The haggis, carried by Winnie Scott, our hard working cook, was piped in by Chris Webb. Martin Gray, with his eye on the ‘Great Chieftan o’ the Puddin-race’ followed with a spirited address. Jimmie Thomson recited ‘The Selkirk Grace’ before Winnie’s splendid supper was consumed:

Till a’ their weel-swall’d kytes belyve
Are bent like drums;
Burns.

Cider was the accompanying drink, with John Barleycorn for the toasts. 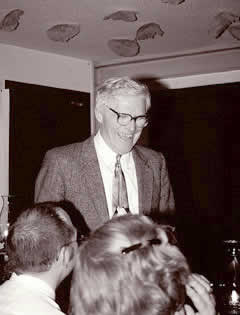 Archie Bevan from Stromness, who gave The Immortal Memory at this year's North Ronaldsay Burns Supper.

Archie Bevan then rose to give The Immortal Memory. For many years Archie had been head of the English department at the Stromness Academy and had also served as depute rector. Recently, his work for the St Magnus Festival, of which he was a founder member, was recognised with an MBE. He gave a fine tribute to Robert Burns, touching on many aspects of the poet’s work frequently using quotations from his poetry. He stated his great contribution to Scotland’s heritage as a collector of songs: a labour of years for which he neither asked for nor received any remuneration; his understanding of human nature; his fearless exposure of hypocrisy; his preparedness to admit to his faults and to bear responsibility where necessary. He mentioned Burns’ life of unremitting toil, which probably was the cause of the debilitating illness over the last years of his short life. Archie referred to the Bard’s recognition in countries all over the world which, even over the two hundred years that have passed since his death, was still as strong as ever. He also remarked that four of Orkney’s writers and poets, George Mackay Brown, Robert Rendall, Edwin Muir and Eric Linklater, all had paid tribute to Robert Burns’ genius. The speaker concluded his address by asking the company to toast the Immortal Memory.

Sydney Ogilvie proposed an original, ‘Toast to the Lasses’ in verse with his wife Anne replying in similar vein. This was followed by Susan Webb on fiddle when she played a selection of music from Scotland, Ireland, and Shetland, finishing with some familiar Burns tunes. Susan plays with the Orkney Reel and Strathspey Society, and also teaches young people attending the Orkney Traditional Music Project to play the fiddle.

I followed the fiddle music by reading an account, originally printed in The Orcadian (2/2/1933), of North Ronaldsay’s first ever Burns Supper. It makes an interesting comparison with our own efforts, and with some of the differences between the island of almost 70 years ago and today. I will shortly return to this article which had been researched and sent to me by Beatrice Thomson who lives in Finstown, (formerly Neven, North Ronaldsay)

Susan Webb once more took up her fiddle to accompany the communal singing of three of Burns’ songs. Although we sang without practice we nevertheless had some fun with our efforts. Isobel followed with an eloquent reading of part of one of Burns’ letters to a friend, Captain Francis Grose, in which he relates three witch stories about the Kirk o’ Alloway. Isobel read the particular story which mainly inspired ‘Tam o’ Shanter’. Archie Bevan then went on to give a fine rendition of this well-known poem.

She tauld thee weel thou was a skellum,
A blethering, blustering, drunken blellum; … …
She prophesied that late or soon.
Thou would be found deep drown’d in Doon;
Or catch’d wi’ warlocks in the mirk,
By Alloway’s auld haunted kirk.
Burns.

We then enjoyed a solo sung by Sydney Ogilvie called, ‘John Barleycorn’. Three more Burns songs followed with the final song, ‘The Star o’ Robbie Burns’. I took advantage of a short interlude to unveil one of my larger seascapes, which I gifted to the NRCA. The painting was in acknowledgement of my own presentations, received at the end of the year event, which I had felt were much too generous. Peter Donnelly accepted the oil painting on behalf of the association and the island, expressing admiration and thanks.

Very shortly, the ‘peedie’ dance got under way and we jigged, waltzed and swirled to the best of our ability. One Eightsome Reel was managed with two sets on the floor; for a time Susan Webb playing her fiddle, fairly made us dance like fiends with her fast reel times.

The dancers quick and quicker flew;
They reel’d, they set, they cross’d, they cleekit,
Burns.

Then the accordions took over to give us a little respite and finish the dance a little more sedately. Chris Webb had a go on his small pipes for the second last dance, and finally our own two very faithful players, who have provided music for many years, ended the evening with a waltz and ‘Auld Lang Syne’. Hip, hip, hurrahs resounded through the room to complete our Burns night.

I said I would come back to the account of North Ronaldsay’s first Burns Supper and make some comparisons. The 1933 Burns’ Supper, held on January 27, was conceived and managed by Mr and Mrs Flett – “aided by an able and willing committee, (The Memorial Hall Committee) chosen from the youth and beauty of the island”. Mr Robert Flett was the head teacher at the school from 1933-1940 and the event was held in the school rather than the Memorial Hall. This was because of the availability of a large coal-fired boiler in which three haggis were cooked. Mary Tulloch, Burray (a member of the committee and one of the haggis makers) tells me that they were made from the island’s own ground oat-meal, grated fat, onion, seasoning, and the chopped up heart, liver, and the kidneys of our native sheep.

In order to give sufficient space in the school, a movable partition that used to divide the Little End (primary) from the Big-End (senior) was folded back. Trestle tables, along with forms for seating, dishes etc. had to be carried up by hand from the Memorial Hall

The school was described as being, “transformed into a veritable pleasure palace. The tables were artistically set with all the delicacies appropriate to the occasion, and even the time honoured haggis proved a tempting dish – certainly a master hand had been at its preparation . . . An eloquent address on Burns was given by Mr Robert Flett, and Mr James Swanney, Trebb, occupied the chair as no other could. His humorous comments, no less than his well chosen ‘Selections from Burns’ brought the house down with laughter”.

Of the ten familiar songs sung in 1933 such as; ‘Ye Banks and Braes’, ‘A Highland Lad’, and ‘Afton Water’, we had in fact chosen six that were the same. The population in 1933 was around 283 whereas today the population is barely over 60. The attendance at that first Burns Supper was, I’m told, between 90 and 100. Our event had about 40, but eight came from the Mainland. Looking at these figures it is surprising that less than 100 were at the function, but in those days the children were not allowed at Burns Suppers (at least not this first one), and older members of the population tended to stay at home. This was maybe because they were getting on in years, or had to look after the young children or be with those who were too old and frail. Another consideration was, that people would not have had motor conveyance and roads would have been very much rougher than today’s modern surfaces.

They, along with the few members of the general audience still alive, wherever they may be, will surely recall memories of great days in North Ronaldsay almost 70 years ago.