I’m beginning this letter as May comes to an end, and before very long the longest day will be upon us.

I always think that North Ronaldsay is, in many ways, at its best at this time of year. The island looks very green with the first flush of early grass set against the summer blue of the sea and sky, and along the three main lochs – Bridesness Loch, Ancum Loch and Hooking Loch – and here and there in marshy ground, the marsh marigolds are in full bloom. Every day the skylarks are singing and, from time to time, the blackbird whistles as does the curlew or ‘whaap’. Then there is the sound of calling terns, oyster-catchers, and my favourite, the ‘tee-wup’ or lapwing. The other morning, when still in bed, I was listening quite carefully to a blackbird singing. Between each part of the song there is a pause of maybe about five seconds or even as long as 12 or more, and I think that the bird improvises as he sings for the sequence of notes always varies in length and melody.

But thinking for a moment about the beauty of the island in the early summer, I’m reminded of Willie Swanney’s poem ‘A song of North Ronaldsay’ which I was reading the other day. One verse goes like this:

‘I would hear the praise of that emerald gem.
In its setting of silver ocean.
As it basks so fair in the noonday glare
Mid the seas in their glittering motion’. 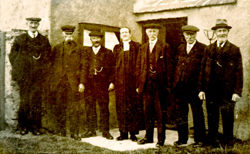 Willie Swanney lived at a croft called Viggie on the south east side of the island and not far from the sea. He spent all his days on the island working his small steading, and in the summer, like many other islanders, he fished for lobsters. Willie was an elder of the church.

I remember visiting the little croft house with my uncle in the late 40s. On the kitchen table would be bits of paper – backs of calendar month pages, envelopes, etc, and the white wrapping paper of the posted The Orcadian or Orkney Herald which, when opened up, provided a good length of writing material. Willie was greatly interested in composing poetry, mainly about the island, which he wrote on those bits and pieces of paper. Had he been able to obtain the further education of today’s generations who knows what he, and many other island folk, might have done. One of his better and more memorable poems was, ‘The Hairst o’ Thirty-eight’ – that year (1938) was a particularly bad harvest. After he died, aged 80, in 1952, a little book of his best poems was published. If I remember correctly it was called, ‘Island Musings’.

Well, May has been a very busy month what with a wool mill (from Canada) being set up at the New Lighthouse with all the preparation work. At the same time the New Church has been partly renovated inasmuch as, so far, the session roof has been re-slated, with the inside of the church, entry hall and session house given a wooden ceiling, and the main interior of the building has been re-decorated.

The North Ronaldsay Trust (owner of both buildings) is responsible for those developments – carried out by a few really hard working individuals. Presently, work goes on in perfecting the complicated spinning procedures. An expert from the Canadian firm, who supplied the machinery, has recently left the island after setting up the equipment and giving instructions in the various spinning techniques, felt making, etc.

Then there has been a May wedding when Georgina Hunter (Stirling) and Graeme Scott (North Ronaldsay) were married. Michael Scott (Graeme’s brother) was the best man, and the two bridesmaids were Olivia and Laurie Hunter (nieces of the bride).

All residents on the island who were able were at the wedding. In addition, many friends and relations, who came from far and near, attended – some close relatives coming from as far away as France. Upwards of 145 were present in the newly re-furbished church. Rev John McNab from Sanday conducted the marriage ceremony and Rev Tom Clark, Stenness, also took part in the proceedings. Morag Sinclair, Kirkwall, was the organist. Many photographs were taken of the bridal party both inside the church and outside and, later, in Holland House. The bride looked radiant in a magnificent ivory white dress, accompanied by her two young and very graceful bridesmaids. The groom and best man were in Highland dress. Eventually, at the New Community Centre, amid beautifully arranged flowers, candles, fairy lights, and many other hall decorations, the company was ready for the events to unfold. The evening began with speeches, toasts, the cutting of the bridescake, and more photographs, to be followed by the wedding feast laid out on long very attractively set tables. 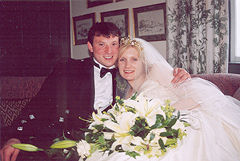 Once everything had been cleared, a long night of dancing and general enjoyment ensued. Refreshments were served as the night slipped away. Bridescake was served with the traditional bridescog making its rounds.

Around 3am this special occasion drew to a close as Auld Lang Syne was sung. Eight years have passed since the last island wedding of a married couple who still live here, and although Graeme and Gina plan to come back to North Ronaldsay they will be working in the south for a number of years.

Weddings are great occasions but this wedding was not, I venture to say, without drama of one sort and another. For, at about 5am, on the great day, a close relative of the bridegroom became very seriously ill, and before most folk were up and about a Loganair ambulance plane took the invalid away to the hospital in Kirkwall. Fortunately, the patient is making a good recovery.

On a lighter note, somehow or another, the appointed ‘chauffeur’ (who was not quite familiar with North Ronaldsay’s houses) mistook the temporary residence of the beautiful bride, so for quite a little spell the bride and her various attendants were not to be found.

Meantime, in the church, where everybody was waiting, time passed pleasantly enough with Morag entertaining the company on her keyboard with appropriate music. The kirk was warm and folk sat in relaxation, speculation and comfort until at last Wagner’s, Bridal March set everything in motion.

And still connected with the church, the following morning when Sunday worship was proceeding peacefully, drama again unfolded, for, into the kirk sprang the local ferry agent (with apologies). She told those present, who intended leaving the island on the trip-ferry, to make their way to the jetty right away. A fresh southerly wind was blowing almost directly on to the jetty, and conditions were judged such as to only allow the briefest of contact by the ferry. Well, after a second or so of stunned silence, down went the cover of the keyboard and out went the organist with the instrument under her arm followed by others who had planned a more leisurely afternoon return trip to Kirkwall. Additional passengers destined for the ‘toon’ were alerted and quickly made their way to the boat – the church service continued as if nothing had happened. Incidents of this sort, unplanned and unexpected, become part of the history of such events.

One of the recollections that I have of a barn wedding held at Kirbest away back in 1947 (when I was seven) was of Henry Thomson, Neven, singing Cigarettes and Whisky and Wild Wild Women – a song popular in the 40s. I think Henry would have only been 14 years old at the time. I have a hazy impression of the barn and of fiddle music though there must have been an accordion or melodeon playing as well. Twenty-four years later Henry, who made his living from lobster fishing, was lost at sea off Lopness in Sanday.

In the old days weddings were usually held at the house of the bride and often in the barn, though others of more recent times that I remember took place at the Memorial Hall where, of course, extra space was available if large numbers happened to be invited. The distinguished Orcadian writer and folklorist, Ernest Marwick (1915-1977) writes about ‘Old ways at Island Weddings’ which can be read in An Orkney Anthology – Selected Works of Ernest Marwick, edited by John D. M. Robertson.

He mentions many interesting superstitions and old customs connected with weddings, one or two of which I will mention. He says in his great-great-grandmother’s day an Orkney wedding could last for three or four days with the guests bringing much of the food and drink with them; the bridescake was made from oatmeal, butter and caraway seeds, which was flung over the bride’s head.

Everyone scrambled for a bit, and it was considered lucky to secure the largest piece. In a further article Ernest says weddings were usually held in winter and Thursday was the lucky day on which to marry, with Tuesday and Sunday the best alternatives. It was important to marry when the moon was waxing, that is between a new moon and a full moon, and with the tide flowing. In those far away days, superstitions were believed and respected. Writing in his lifetime, Ernest says that today most of the old customs and beliefs have faded into the past. The passing round of the bridescog is, he says, about the only one of the old ceremonies that survive – and that is still true 26 years later – and it is probably the one custom which will survive.

Here I am sitting outside in a comfortable chair on the ‘brigstanes’ for a ‘peedie meenit’ just to bring this letter to a close. Round and about me bluebottles are humming in the warm sunshine, and in our front garden a yellow and black bumblebee is busy in a tree. For a moment he suddenly took a spree and flew round my head presumably on an investigative flight – though I have never been stung by a bee, I like it best when they busy themselves elsewhere. In the distance terns are calling, and at our neighbours’ house of Purtabreck nearby a blackbird has begun to sing. Well, I think it would be nice to finish with another couple of verses of Willie o’ Viggie’s, ‘Song of North Ronaldsay’:

‘Will you sing me a song of our native isle,
The home of our loved forefathers,
When the sun rides high in a cloudless sky
And at twilight the sea mist gathers.
Will you sing it again in a gladsome strain
When the young lambs frisk and play,
In their innocent mirth o’er the sunkissed earth.
All the livelong day.’