In days when daisies deck the sod
And blackbirds whistle clear,
Wi honest joy our hearts will bound
To greet the coming year. 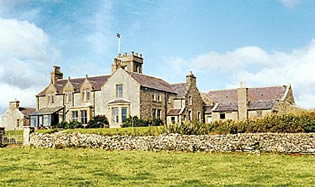 The above verse by Robert Burns is quoted among a number of poems suitable for the month of March, by Edith Holden (1871-1920), who kept a diary for the year 1906. I have mentioned her illustrated diary before.

She, by the way, was drowned in the Thames at Kew, while gathering buds from a chestnut tree.

As well as quoting some favourite poems and verses, and writing up her diary, Edith Holden gives an explanation as to the derivation of each month of the year.

For March she says: “This month was called Martius by the Romans, from the God Mars, and it received the name ‘Hlyd Monath’, ie ‘loud’ or, ‘stormy month’ from the Anglo Saxons.”

I suppose one could say that March came in like a lion so we might hope for a fair end to the month.

Already there is a feeling of spring in the air, and the daffodils along the roads and in gardens are not far from brightening up the island with flashes of yellow. But for all that, March is a month to be wary of.

The other day, I visited the gardens at Holland House. The snowdrops are past their best but they last a while under the shelter of the old trees, and the garden dykes, where they are scattered in great profusion.

They are well worth a look when in full bloom. Anyway, on this visit, I was looking to see if the primroses were beginning to flower.

Only one or two of the pale, lemon yellow-coloured flowers had opened — a bit early yet I thought. Another week or so and they will be decorating the brae in front of the big house in clusters. And the bluebells, of which there are hundreds, will follow a little later to please the eye. Where they are in greatest profusion, their delicate scent will pleasantly pervade the air.

Winnie (the school cook) has just phoned to tell me that the eclipse of the moon is in full swing.

It’s 11.20pm — just the time predicted. I left all and stepped out into a darkened night. Earlier, a virtually full moon lit up the island almost like the day. What an amazing sight — a pale, coppery, blood-red orb high in the southern sky.

The night is chilly and I saw, guided by the constellation of the Plough to the North Star, that the wind is south-westerly. As it will, I believe, be another six years before the next full lunar eclipse I am away out for a road walk (not to Riff Geo this time) so that I can observe the changing scene.

I first walked south, past the War Memorial, its granite cross silhouetted against the sky, and remembered the war dead. Then on to the Memorial Hall where perhaps the ghosts of past generations relive, for a time, great days and dance a jig or two.

Great days too, of old, across the road on a Saturday night, at the one-time shop of Roadside (now a pub and restaurant). On such a night the shop would have been full of folk from about every “tunship” — of which there are six.

And what about the talk? What talk indeed, what stories, fun and banter! Further I travelled, and from nowhere it seemed — for no visible clouds could I see — a fine rain merely dampened my face for a minute or two. Could it have been some ghostly lunar shower in keeping with the strangeness of the night?

Next, I passed Holland’s gardens where stark, leafless branches of the many trees creaked in the wind. And where the dominating shape of Holland House and the adjacent steading buildings, silent in the night, stood out black, and somewhat menacing against a starry sky.

With my back to the moon and the wind, I walked home. Once, when looking round from time to time, I saw a pale, misty-looking cloud, like a fine gossamer veil, briefly pass the face of the moon (now beginning to regain her brilliance) and for a moment a little halo of rainbow colours could be seen.

Well, I’m returning to my Holland gardens visit. So fine was the day, with summer looking clouds passing overhead and a tingling northerly wind, that I had a good excuse to dilly-dally for a time.

So I sat myself down in the shelter of the building on a very old, cast iron seat. Across its frame were bolted slats of an enduring hard wood — probably oak.

The seat dates back to far off days when the then Laird was in full residence, and when, in the summer and later, the house would have been a hive of activity, with family and friends on holiday; croquet on the well-kept lawn; golf at the north links and the shooting of game later in the season. All of this with whatever island administrative business that might have been on hand.

As I sat in the surprising warmth of the afternoon sun, I thought of such things and of how the island would have been 100 years ago.

Such an existence would well nigh be impossible given the vast changes in agricultural methods and circumstances, and with present-day economics, attitudes and expectations.

My view south more or less encompassed the North Ronaldsay Firth with the islands of Sanday, Eday and Rousay in the distance.

One begins with the Start Lighthouse in the north of Sanday but it’s actually furthest east from my position.

In the west, Westray lay stretched across the western approaches. Part of the firth was a sheet of blinding silver caused by the sun’s reflection. It fairly dazzled the eye but where a large bank of cloud stopped the sunlight, the sea, near the Sanday land, was dark and almost black by contrast.

In the background I heard a skylark sing and a little wren whistled nearby. The smart black-headed gull is back and the lapwing, oyster catcher and curlew are to be heard almost every passing day.

For a time I idly reminisced. How many times had I crossed that stretch of water by post-boat to Sanday I wondered?

Twenty-five to thirty times maybe, when we came and went from Kirkwall and further afield. If it was not by post-boat, then it was on the old coal-burning steam ship, the Earl Sigurd, and almost as many times but by direct passage.

Then, going back to the last years of the war — since, in 1945, I would only have been five years old — I can remember the four tall pylons on the north end of Sanday that formed part of Britain’s early warning radar system.

I read recently that two were steel pylons (350ft high) and two were of wood (240ft high). They were removed some years later.

It is a little surprising to think that the steel towers would have been just higher than double the height of our New Lighthouse (139ft) with the Old Beacon (70ft) placed on top.

The pylons formed part of a chain of such stations that stretched from Land’s End to John o’ Groats and to Orkney and Shetland.

The northerly stations gave warning of German bombers, flying from Norway (captured in 1940) on their way to attack targets such as the naval base at Scapa Flow.

Another memory is of the smoke of burning fires of rough grass or bent that, in the spring, we could see in Sanday and on the higher hills of other islands. When the wind blew from the south, the smell of the fires carried all the way across the firth. I fancy I can still remember the almost pungent smell of the burning grass.

From where I sat, looking across the south-west of the island, I could see the old ‘Stan Stane,’ that monolith of a bygone age.

Then, not far from Gretchen loch, is the Laird’s pillar. It is a conical-shaped, 14ft high, stone-built construction. There, in 1924, while stepping over a dyke, the Laird at that time, W. H. Traill, lost his life as a result of a shotgun accident.

Next in line one sees the site of South Cott, where once folk lived and worked. Part of the remains of the house was built into a square with a pyramid-shaped top.

As I looked further north-west I could just see the one churchyard (there are two) which partly surrounds the Old Church, built in 1812. Within its walls lie the remains of probably all of the 400 or so folk I mentioned who lived 100 years ago.

There, at that final resting-place, my line of vision ends with the house in front of which I was sitting.

Well, that was my view from Holland House and those are one or two memories and observations. Over the time of my visit the bank of cloud referred to earlier seemed to creep up on the wind, which came from the north, until eventually it hid the sun from view.

Suddenly it became decidedly chilly, and little wafts of cold air came furtively round the corner of the big house near to where I had enjoyed this pleasant break.

I thought — enough of this; I’ll come back another day when the sun is shining, and the primroses and bluebells are in full bloom, and when the North Ronaldsay Firth dances in the sun.